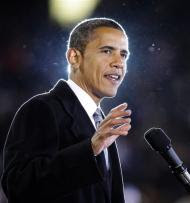 As the big day approaches, a round up of today's election stories:
Stay tuned as the countdown continues.
at 14:54

Pitchfork have put together another round up of campaign songs, here.