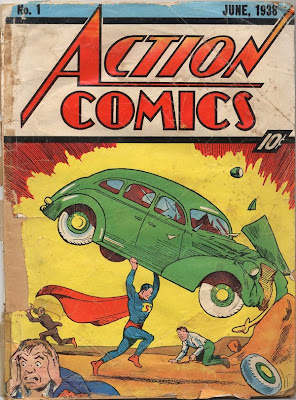 This month marks the 70th anniversary of the publication of Action Comics #1, the first appearance of Jerry Siegel and Joe Shuster's Superman and, as such, the inauguration of the superhero era. Whilst this important anniversary hasn't garnered much attention yet, AFP covers the event here. The blogs have come up trumps, too, and both Mark Engblom's Comic Coverage and Tony Z's Comics N' Things have devoted a month of posts to the anniversary. Even better, you can read Action Comics #1 in its entirety, hosted by the University of Virginia, here.
at 08:44 No comments:

News: Happy Birthday To Us 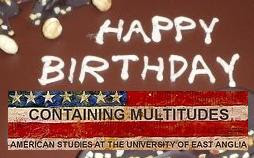 Yes, it really has been a whole year since the School of American Studies at the University of East Anglia inaugurated this blog. In that time, Containing Multitudes has fulfilled (and extended) its brief to serve as an informal record of life in the school, and a guide to issues of interest in our discipline.

We've covered a plethora of news stories, and paid particular attention to the ongoing election drama (more of which to come); we've heard from AMS students in far flung fields, made some new international friends, and warranted some interesting mentions; we've profiled research tools, original readings, original writing, and kept a record of a great year of research seminars.

Since it's been a while, it's worth reminding everyone that you can keep up to date with Containing Multitudes through a variety of channels. You can receive updates via the Portal, get e-mails (see the sidebar), subscribe to the feed through the reader of your choice, and/or become a fan of AMS on our Facebook page.

Whilst the rate of posts may slow over the summer, fear not: Containing Multitudes will be back in full effect at the beginning of the new academic year. In fact, we'll be better than ever. Big new developments are on the way, so stay tuned.
at 13:05 No comments:

Homer Noble Farm. Inset: some of the damage.


In December 2007, a group of partying teenagers broke into poet Robert Frost's preserved home, Homer Noble Farm, in Vermont. During the course of the evening, they caused considerable damage to the building and its contents (see the New York Times account of proceedings, here). What's really unusual about this story of teenage vandalism, however, is the mode of punishment meted out to the transgressors. As the New Yorker's Book Bench reported: "the delinquents were sentenced to two sessions of study with the Frost biographer, poet, and professor Jay Parini, a punishment for which students at Middlebury College normally pay a hefty sum." Said prosecutor John Quinn: "I guess I was thinking that if these teens had a better understanding of who Robert Frost was and his contribution to our society, that they would be more respectful of other people's property in the future and would also learn something from the experience" (via the AP). Selecting Frost's "Road Not Taken" and "Out, Out" as his texts, Parini clearly felt that the punishment was an appropriate one: "Believe me, if you’re a teenager, you’re always in the damned woods. Literally . . . And metaphorically you’re in the woods, in your life. Look at you here, in court diversion! If that isn’t ‘in the woods,’ what the hell is ‘in the woods’? You’re in the woods!" (via the Wall Street Journal Law Blog). So what do you think about the use of poetry as punishment, Frost's or otherwise? (via Guy's Lit Wire.)

In other news: this clearly isn't a good time for historic literary houses. Both Edith Wharton's Massachusetts home, The Mount, and Mark Twain's Hartford, Connecticut residence are in dire need of charitable donation. Support The Mount here, and The Mark Twain House & Museum here.
at 12:59 No comments: 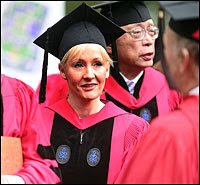 Would you be happy to see J. K. Rowling at a UEA Congregation? Which notable figure would you like to see? If you're after some inspiration, the Washington Post lists some of this year's other celebrity graduation appearances.
at 11:38 1 comment:

Election News: "The end of one historic journey..."

"... and the beginning of another." Barack Obama's words, as he crossed the crucial delegate mark and claimed the Democratic Presidential nomination. Cue the analysis: 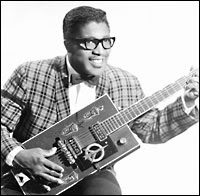 Music pioneer Bo Diddley died earlier this week. This has led, in some circles, to a reassessment of his legacy. The consensus seems to be that Diddley's (really, Ellis Otha Bates') contribution to the creation of rock and roll in the mid-1950s has still not been adequately recognized. As a corrective, here's a short guide to the life and work of a true original: