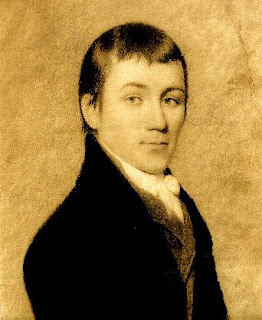 This week, American Psyche goes back to the beginning of America’s literary tradition, exploring one of the nation’s earliest frontier narratives, written by its first serious author.

Writing at the very end of the Eighteenth Century, Charles Brockden Brown employed the Gothic mode, so popular in Europe at the time, to articulate the cultural fears of the young Republic. As he powerfully asserts in his preface to Edgar Huntly (1799), however, the new American writer must reject the vogue for “Puerile superstition…Gothic castles and chimeras” found in Old World Gothic literature, instead choosing “[t]he incidents of Indian hostility, and the perils of the western wilderness” as far more reflective of the national experience.

From the time of the earliest settlers, and in the corresponding captivity narratives such as Mary Rowlandson’s, the American wilderness had been imagined as a paradoxical place: on the one hand, a land of diabolic threat, teeming with ‘savage’ Native Americans that needed to be restrained; on the other, a land of opportunity, a tabula rasa on which the settlers could celebrate their new covenant with God, and establish an exceptional society. This dichotomy proved particularly fertile to Gothic interpretation, and Edgar Huntly exploits this national preoccupation to startling effect.

Within the novel, therefore, the wilderness is clearly presented as an arcane and confusing place:

It was a maze, oblique, circuitous, upward and downward… abounding with hillocks and steeps, and pits and brooks (659).

Brown was writing during an era in which notions of what it meant to be ‘American’ dominated the national discourse. As such, Huntly’s violent confrontation with the ‘Indians’ has been read by Jared Gardner as an attempt to create a national identity, one in opposition to the perceived heathen natives (“Alien Nation: Edgar Huntly’s Savage Awakening,” 1994). In the celebrated cave scene, occurring at the centre of the narrative, Huntly even appears to undergo a ‘rebirth’, surrounded by the familiar trappings of this dangerous landscape, including a savage figure, Indian weaponry, and a carnivorous wild beast.

Upon re-entering the landscape, Huntly is indeed in a New World, in which, “No marks of habitation, or culture, no traces of the footsteps of men, were discernable.” Nevertheless, as Allan Lloyd-Smith has noted in his American Gothic Fiction: An Introduction (2004), Huntly’s subsequent violent subjugation of the Indians essentially exposes himself as just as barbaric as his supposed enemies; his metamorphosis in the cave has conferred a new identity on him, but this identity is in sharp contrast to the rational, enlightened figure Americans wanted for their new character.

Brown’s ambivalence towards the American landscape clearly emerges in the text, therefore, and is confirmed through his depiction of Huntly as a somnambulist: the latter’s oneiric wanderings seem to problematize the very ideal of Manifest Destiny, which had propelled much of the earliest settlers ever further into terra incognita. For whilst his somnambulism could be seen as a reflection of the almost subconscious pioneering streak which coursed through the nation, we may also read it as a metaphor for white settlers’ ignorance, as they desperately sought to expropriate the new landscape without consideration for the consequences.

In Edgar Huntly, the American wilderness is no longer the fertile blank canvas, as imagined by many of the Puritan settlers; rather, it is a place which changes them, a dangerous space which vividly symbolises the national concern over what exactly constitutes an American in this brave new world.