In association with the UEA American Studies Society, we're hosting an Election 2016 Roundtable on Wednesday November 2nd - 3pm in Lecture Theatre 3. Get your burning election questions ready! See you there!
at 09:26 No comments:

Next week, Professor Russ Castronovo is delivering the inaugural US Embassy American Studies Lecture (with thanks to the US Embassy in London). Details below - all welcome!

“Sex and the Conservative Girl: Consent, Masochism, and Ayn Rand” 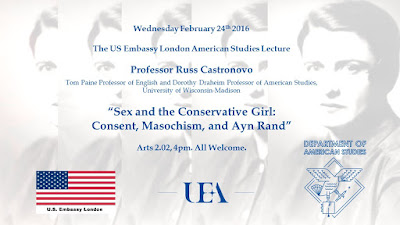 “Formation” as Homage to Storyville?

Mollie LeVeque muses on the "Storyville Portraits" and Beyoncé

After I saw Beyoncé’s “Formation” video, I said to my fiancée – the wonderful, long suffering partner of a neurotic PhD student – “Someone is bound to notice references to the Storyville Portraits!” Granted, I’ve been researching these enigmatic images of New Orleans sex workers for years; they are the driving force of my doctoral thesis. I wrote my MA dissertation on them, too - though I made mistakes, constantly disagree with myself whenever I reread it, and dislike my casual use of the words "prostitute" and "whore." (Retrospect.)

On February 12 my Facebook feed was inundated with links to Moira Weigel’s piece “The Iconic Images Behind Beyoncé’s ‘Formation’ Video.” I was pleased to see them garnering discussion in a new context, and she provides a pithy summary of the images’ history. Evidently, too, friends were excited that my mildewed research topic finally made contact with the “real world” of contemporary popular culture. As Weigel says, “It is not hard to see how Bellocq’s portraits might have appealed to Beyoncé and her team.” They provoke many questions.

Bellocq resists classification despite the way his images have attained a supposedly “iconic” status. His work still remains a niche topic. Aesthetically, it’s haphazard. At times, it’s uncomfortable to view. (It’s also beautiful, in my opinion.) Yet Bellocq didn’t publish any of these portraits - they remained hidden for years. Some researchers claim they were used as advertisements; I come down more on the side of skepticism.

As a white historian of early 20th century sex work in a place where many of the sex workers weren't white, I’m nervous that we moralize, or whitewash, these images at the expense of histories that are – because of the stigma against sex work, and a further marginalization of black sex workers (and sex workers of color) – often ignored. The majority of women Bellocq depicted are anonymous. This isn't accidental.

Between the 1950s and early 1970s –  when the Storyville Portraits were being rediscovered, and later exhibited (notably by Lee Friedlander and John Szarkowski) – little thought was given to what the women might have thought about their labor. When the photographs were exhibited again at various venues in the early 2000s, they still inspired maudlin reviews. Sentimentality – or an assumption that the models were victims and Bellocq somehow "saved" or "humanized" them – should not be intrinsic to interpretations of these portraits. Seeing echoes of them in a music video is refreshing, even if those echoes are perhaps accidental.

According to Rex Rose, Bellocq was “a Storyville dandy” who had an aesthetic interest in his topic. He was likely friends with his models – their client, maybe – and if we are to truly engage with his images, we should focus on the women, not just their potential relationships with Bellocq. He’s one factor – I’m also interested in their circumstances, in their initiative and struggles. Weigel muses, “Because we know so little about the intentions of the man who shot [the photographs], the women come alive as subjects, not victims.” But I disagree with the idea that not knowing Bellocq's intention is what allows the women to be "subjects." They're always subjects, and they seem to be – at least to some extent – comfortable with their jobs, and with Bellocq taking photographs of them.

But many years after Storyville’s 1917 closure, a musician who had played in its dancehalls made a harsh assessment:


[The models] were very pretty, and that’s something that I never ran across in my life, was a pretty whore. I mean, that I knew of. Maybe I’ve seen some on streetcars, and, you know, busses, and they may have been. I wouldn’t know that. But I mean in any of those places, I’ve never seen anything that resembled beauty.

This is telling. Given that Bellocq was a white Creole, and by looking at his models' appearances, we can assume he worked in “white” Storyville. Facilities for black customers were separate and generally amounted to cheap "cribs:" narrow rooms with a bed and little else. Women who worked in cribs were most likely older, less conventionally attractive (including dark skinned black women, or women of color), or otherwise less marketable.

Some of the portraits’ intrigue, then, resides in what they do not confirm, not necessarily in their nudity. It's hard to say definitively without knowing exactly who they were, but Bellocq took photographs of white women, white-passing women, or light-skinned women of color who worked in more expensive brothels. These women were likely the ones featured in local directories of brothels, which would not have advertised the "lesser" establishments. Many of their stories won’t be told, simply because records don’t exist to tell such tales. (We don't really listen to sex workers, regardless.)

Still, these women left their marks. Most of them, including the poorest, would have balked at being called victims.

Storyville was a strange, dynamic place. As Emily Epstein Landau has detailed, at least two powerful madams fought to keep brothel workers desegregated (albeit for business advantages). Others were said to protect their workers from physical abuse. Some strongly influenced society life in New Orleans – to the chagrin of “respectable” ladies who campaigned in Progressive circles. R. Eric Platt and Lillian Hill, meanwhile, observe that Storyville sex workers fostered circles of learning about topics as diverse as classic literature, economics, and sexually transmitted infections.

None of this is surprising. But we need to stop being surprised, and question why these images of women almost always immediately conjure ideas of tragedy when they, on their own, do not necessarily suggest it.

“Formation” functions, at least in part, as a homage to these women. Their lives were more complex than the remaining primary sources and pervasive folklore would have us believe. They should never be underestimated or forgotten. If Beyoncé and her team meant to evoke the Storyville Portraits at all, they acknowledge a powerful lineage.
at 21:48

Here's our line-up of speakers this semester - all welcome! With thanks to the US Embassy London.