Carter Revard Redux: Rattlesnake Meat in the Garden of Walmart 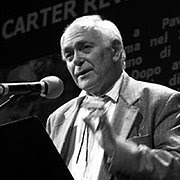 I consider myself very fortunate to have been present at the first AMS Research Seminar of the new academic year where an American scholar and poet called Carter Revard read and discussed some of his work. Whilst I am no authority on poetry, what struck me at the time was the power of the vocal delivery. Carter Revard juxtaposes an intense intellectual sophistication in the employment of language and imagery in his poetry with a gentle, almost playful articulation which makes for a potent mix in which meaning forcefully ‘comes down’. The vocal delivery at the seminar prompted me to buy a copy of his book ‘How The Songs Come Down’, which was published by Salt Publishing in 2005. There is much in this book to commend it to readers who seek to make sense of today’s chaotic world.

Carter Revard is special because his personal native American traditions have been combined with a scholastic discipline that he refined at Oxford and Yale Universities during the 1960s to produce a unique approach to creative writing. I think that the poem ‘Making Money’ is an excellent example of this ‘double vision’, but also a marvellously apposite observation on the woeful state of the world’s economic affairs. The clever recontextualization of a couplet from Alexander Pope’s ‘On the Use of Riches’ adds even more gravitas to the condemnation of the diabolical machinations of the money manipulators of today’s world, whilst making a poignant appeal to ecological concerns with the plaintive cry, ‘Bulldozers let them be...’ For me, this poem sums up beautifully the potential tragedy inherent in our current global situation, of which we all need to be aware, and I would recommend Carter Revard’s work to anyone who has an interest in finding a way forward.

'Making Money', from How the Songs Come Down (Cambridge: Salt Publishing, 2005) - reproduced with permission of the author.

Stamp a picture on some metal
that you've shaped thin and round
and it's worth lots more.
Same way with planets:
draw your lines across one,
say you've divided it into
small pieces, and it's worth
a million times as much.
The closer you have drawn the lines,
the more each piece is worth.
A field you couldn't walk around in less
than half a day
won't pay it's way
in fruit or cattle, honeybees or deer,
but cut it into single acre lots
and you'll be rich.
Moons are worthless, but
look at the price of moon-rocks.
-This is all true, of course,
only if you make a piece of paper
with certain lines drawn on it, curving
in shapes we call names;
those marks combined
with arabesques that we call numbers
turn Paradise or Death Valley into
real estate, transform a tree
to money order, savages
into good citizens:
Blest paper credit, last and best supply,
That lends corruption lighter wings to fly,
as certain also of our own
poets have said.
Cities become the best machines
for generating capital, as it's called.
Look at them from the air at night,
the twinkling tentacles suckering
a wounded earth -
but in the daylight see the smudge
from which their twinkling comes,
then notice how the great lakes
and power stations in the desert lands
and in the mountains have become
their slaves, the clean air turned
to power and the sparkling lakes and rivers sending
pure heat and light into the heart
of great squared-off deserts of glass
and asphalt where the money's made.
What happens when the lines have all been drawn?
The cities die and rot from inside out,
the weeds come up through asphalt cracks,
blue chicory flowers grow across the sidewalks.
Bulldozers let them be: they're scraping clear
another Garden, toppling
old Trees of Life and Knowledge to plant
a Walmart where the shelves will hold
pulp mysteries and romances, exotic
apples and rattlesnake meat in plastic bags. How The Songs Come Down at Salt Publishing