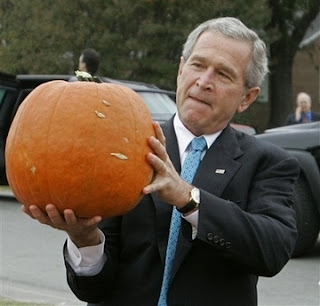 Happy Halloween! To mark the occasion, a series of Halloween themed links - feel free to leave your caption competition entries in the comments section.
If you're doing anything for Halloween this year, we would love to see some pictures.
at 09:05 2 comments: 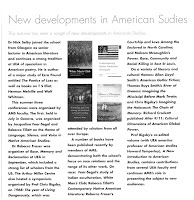 This month's Broadview features a special focus on developments on new developments AMS. Click on the image above for a larger, readable version of the article.
at 08:53 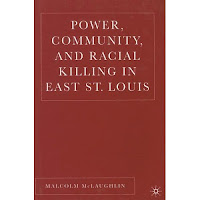 Following last week's public lecture, AMS's Malcolm Mclaughlin, author of Power, Community and Racial Killing in East St. Louis, will be speaking at this week's research seminar. He'll be talking about "The Pied Piper of the Ghetto: Lyndon B. Johnson, Environmental Justice and the Rat Extermination Bill of 1967." 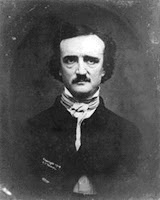 The cause of Edgar Allan Poe's death in 1849 has long been one of American literature's most compelling mysteries. Now, author Matthew Pearl thinks that he might have found the answer: a brain tumour. Read the whole story in the Observer.
at 08:09 The American Studies Year Abroad Programme is featured on the cover of the latest issue of the Faculty of Arts and Humanities Newsletter.
at 09:54 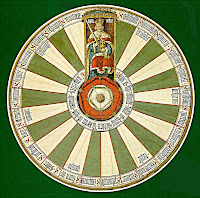 This week's research seminar will be held on Wednesday at 4pm in A2.15. It's going to take a different format than normal research seminars: a research roundtable, it will feature PhD and MA students discussing their research with each other and with faculty. All are welcome.
at 08:43 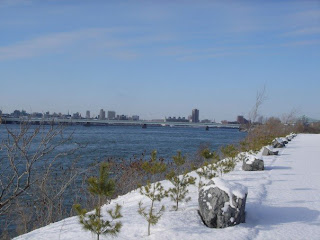 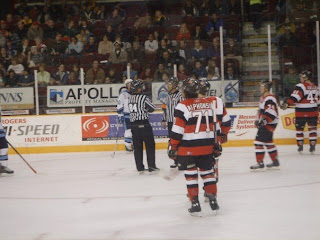 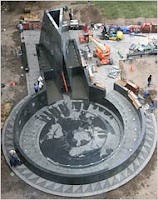 Sixteen years after the rediscovery of the New York African Burial Ground, a National Monument commemorating the site was officially opened last Friday. In use for approximately a century from 1690-1790, the cemetery is thought to have been the final resting place of approximately 15,000 Africans and African-Americans. Find out more about the cemetery and the opening ceremony courtesy of the New York Times, the Voice of America, and the New York Public Library.
at 15:54

This week's Letter from America comes from Tom Urwin, who studied at San Francisco State University:

"On my year abroad in San Francisco, I took an internship at 826 Valencia, San Francisco's only independent Pirate Supply Store. Originally I did it to get a visa extension (who wouldn't want an opportunity to stay in SF as long as possible?), but it ended up being the focus of my second semester.

As well as the store front, which sells compasses, spare peg legs, hats, eyepatches, glass eyes, lard, and everything else the working pirate needs, 826 Valencia is a non-profit writing workshop for kids aged 8-18, set up by author and publisher Dave Eggers in 2002. They run various free programs in 3 main areas: in-schools programs, where volunteers go into a local school to work on existing projects set up by teachers, everything from checking and helping with college entrance essays to writing Shakespearean sonnets (I have a thank-you note with a picture of me as William Shakespeare from one kid); field trips, where up to 30 kids come into the workshop to create a book in a 2-hour session; and after school homework drop-in, which also serves as a free childminding service for parents who can't get out of work to pick up their kids. The workshop is in the middle of the Mission district, a largely latino/hispanic area, and focuses on working with kids from immigrant families, especially where English isn't a primary language.

As an intern, I worked on all the above projects, as well as doing various tasks related to keeping the whole non-profit organisation ticking over. Mainly this involved photocopying and phoning up regular volunteers to beg, cajole and threaten them into helping out on the projects. Probably the most fun were the field trips. Most mornings, a class of kids would come in to make a book, with the help of a group of volunteers. The kids would usually be aged 8-11, though in the summer we had an unplanned group of about 40 6-year-olds come in, and I got roped into leading the whole trip! The kids sit in rows facing a projector screen, where the story appears in front of them, typed up by a volunteer at a computer. The field trip leader goes through the basics of a story - characters, setting, conflict etc - and the kids build the story
themselves. Another volunteer, usually a local artist, brings the characters to life on a drawing board at the front, and after two or three pages have been completed in the group, the kids are given paper and pencils, and each one has to finish the story by themself.

While this goes on, interns and volunteers take the completed pages and illustrations, photocopy them and collate them together, and when a kid has finished, the book is bound there and then in the workshop. Now, as well as the leader, artist and typist, there's one other person who helps out with the field trips, and that is the terrifying Mr Blue. Mr Blue is a cranky old publisher, who lives in the attic above the workshop, is never seen, and has read everything ever written by anyone, ever. This ensures all the characters are original, and there's no Spongebobs or anything else like that. He periodically shouts down at the kids and generally grumbles about the state of the stories he has to read. At the end of the session, all the finished books get sent up for his approval. Amazingly, he is blown away by the quality of writing, and each book gets his stamp of approval. I spent many happy mornings hiding up the ladder shouting at children.

The photo above (which is on the 826 Valencia homepage) was taken on my first day working there. They put me with Arkangel, who I later learned was one of the big initiation rites for volunteers - he was very easily distracted! All he had to do was sit and read to me a chapter or two of his book, but he managed to find a million little distractions. So, since his book was about pirates, we popped into the pirate store up front, borrowed a couple of hats and an eyepatch and bingo! he's reading and happy.

In my time there I got to meet Dave Eggers, Valentino Achak Deng (the inspiration behind What Is The What) and a whole load of writers, journalists and generally inspirational Bay Area creative minds, a large number of whom were under 18. Other highlights included the summer writing camp, a week-long program for high school students, where I got to know some of the kids really well, and who I hung out with (I'm not ashamed to say) at the Harry Potter final book launch midnight party."
at 07:57

Videos from the archives of the Arthur Miller Centre for American Studies International Literary Festival are being made available on-line. The authors featured in the interviews and readings form a veritable who's who of contemporary writing, and these videos are an invaluable and recommended resource. At present, featured guests from 2006-present are available here; from 2000-2005 here; and from 1991-1999 here.
at 17:13

This semester's research seminar series begins on October 10 (4pm, 2.03): Graham Thompson, author of American Culture in the 1980s, will be speaking about "American Products and Cultural Forms in the Long 1980s." All are welcome.

Postgraduate AMS students should also note that on October 17, the research seminar is being given over to a Research Roundtable, a chance for all of our PhD and MA students to discuss their research with each other and with faculty members. See you all there.
at 07:36

The next UEA Open Day is this Saturday, October 6. If you're coming along to find out more information about American Studies, we look forward to meeting you!
at 18:26

News: What's the Matter With College?

The New York Times has revealed the winners of its student essay competition, all of which are available to read online. Entrants were asked to write in response to Rick Perlstein's essay, "What's the Matter With College?" Could you have done a better job?
at 07:33