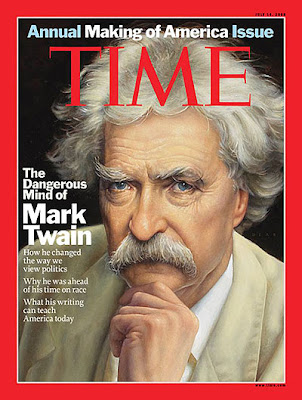 Mark Twain is featured on the cover of this week's Time magazine, the annual Making of America issue. In the words of editor Richard Stengel:

We chose him - after a succession of Presidents: Jefferson, Lincoln, Teddy Roosevelt and Kennedy, as well as explorers Lewis and Clark and inventor Ben Franklin - because he represents a vital tradition in American politics and culture: the comedic commentator on serious matters, the funnyman as our collective conscience who can utter uncomfortable truths that more solemn critics evade. In an election year when so many Americans are getting their news from nontraditional sources, Twain is the godfather of Jon Stewart and Stephen Colbert as well as the comic voices who influenced them, from Lenny Bruce to Richard Pryor to Kurt Vonnegut. And Twain, with Adventures of Huckleberry Finn, created the literary dna that helped shape race relations in America over the past century.

Inside, Richard Lacayo profiles "The Seriously Funny Man"; Roy Blount Jr. examines "Mark Twain: Our Original Superstar"; Stephen L. Carter considers the racial dimensions of Twain's work in "Getting Past Black and White"; Jackson follows Twain's travels in "Man of the World"; and there's a series of portraits here.

Don't rush out to your local newsagents, however - this is the US edition only.
at 09:18 No comments: 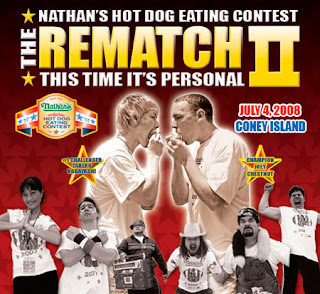 It's Independence Day (as well as being a UEA Open Day, so hello if you attended). You can see how we marked the day last year, here; alternatively, the New York Times has a variety of articles about this year's celebrations here.

Today, however, we're profiling an event that, year on year, has grown to greater prominence: the Nathan's Hot Dog Eating Contest, co-sponsored by Major League Eating and Nathan's Famous Frankfurters. Though internationally famous, the event is often felt to be a uniquely American cultural moment. The jewel in the crown of competitive eating, interest in the contest has grown exponentially since last year saw long time champion Takeru "Tsunami" Kobayashi dethroned by American upstart Joey Chestnut, who also set a new world record of 66 hot dogs in 12 minutes. Accordingly, this year's competition has received an inordinate amount of attention in the press. Here's the ultimate list of Nathan's Hot Dog Contest links:
We'll update with news (and footage) of the winner later. Meanwhile, what's to be made of this kind of contest in a climate of rising food costs and food shortages?

UPDATE: Well, Chestnut retained the crown - though it was close. Kobayashi and Chestnut were tied after the first round - and so began the historic sudden death 5 dog eat off...

As a follow up to yesterday's post, more news from the world of academic blogging: our friends at The Atlantic Community have upped sticks and moved. They're now to be found at America Adrift, and the good news it looks like it will be business as usual at their new home:

Our move is basically premised upon being able to do more of what we already do, just with a few more bells and whistles. But really, just a few.

Our skimpy link list is growing, slowly. Today, we're profiling a very worthy addition to the list. The neatly titled Steamboats Are Ruining Everything is a blog run by Caleb Crain, author, amongst many other things, of American Sympathy: Men, Friendship, and Literature in the New Nation (Yale, 2001). Crain touches on a number of subjects that will be of interest to those in and around AMS, particularly those with antiquarian leanings, and he's got a great list of links for finding nineteenth century material online. Today, however, we're highlighting an essay with more modern concerns, even if its core theme (the interpley between technology and literature) has a variety of earlier analogues: "How Is The Internet Changing Literary Style?"
at 13:29 No comments:

July 1st is Canada Day. The celebration stems from an 1868 "proclamation signed by the Governor General, Lord Monck" which "called upon all Her Majesty's loving subjects throughout Canada to join in the celebration of the anniversary of the formation of the union of the British North America provinces in a federation under the name of Canada on July 1st" (via Canadian Heritage). After a spell as "Dominion Day", "Canada Day" was finally established formally in 1982. To mark the day, a series of links:

If you're an AMS student currently enjoying Canada Day, why not let us know how you're marking the occasion?
at 15:43 No comments: