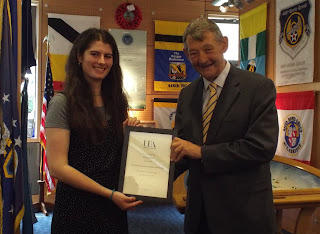 We are very pleased to report that last week saw the inaugural presentation of the Colonel Charles L Walker Scholarship. The recipient was Kate Feenstra, a second-year American Studies student. Group Captain Richard Middleton RAF (retd), Chairman of the 2nd Air Division Memorial Library Trust, presented the scholarship on behalf of the family of Chuck Walker, who have generously endowed the scholarship in perpetuity. 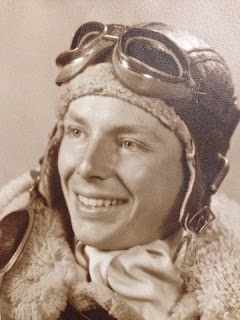 Deeply impressed by UEA’s American Studies department, Chuck Walker instituted his award in 2013 following one of his many personal visits to Norwich.

Kate Feenstra will shortly be taking advantage of UEA’s Study Abroad Programme to study at the prestigious University of California’s Berkeley Campus with the added benefit of a £2000 award from the Col Charles Walker Scholarship. Receiving the award thanks to her outstanding academic achievement, Kate said, “It really is an honour. The more I learn about Colonel Walker’s life and family, the more privileged I feel in receiving the grant.”

The Memorial Library Trust and the American Studies department at UEA have collaborated increasingly through events held at the Memorial Library – itself established by the American airmen stationed amongst the community in Norfolk and Suffolk during World War II in memory of 6,881 of their colleagues who were killed in action. Gp Capt Middleton said “I think meeting the young people at the UEA reminded Chuck that he was about their age when he was flying from Tibenham in 1944. The fact that the Memorial Library meant so much to Chuck 70 years after the event is an example of the impact their short stay in Norfolk had on the lives of those brave young Americans.  Chuck would have loved to have met Kate and encourage her on her way.”
at 14:00 No comments: