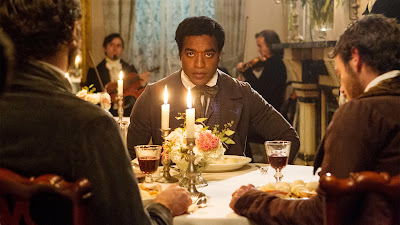 Just before the film started, I saw a trailer for the film Belle,which tells the story of a woman of color who forms the second subject in Johann Zoffany’s portrait of Lady Elizabeth Murray. Dido Elizabeth Belle began life as the daughter of a slave woman from the West Indies and Admiral John Lindsay, and was raised in the household of William Murray, Earl of Mansfield. From the snatches that I saw, this film looks to be more of a romance than the stark and meticulous narrative of Steve McQueen’s 12 Years a Slave, but it offers a window into another history that has seldom reached the level of public understanding: the story of what it was like to occupy a precarious space as a black woman in the household of white aristocrats.
I am glad that black histories from the diaspora are being gradually recuperated in film narratives like 12 Years a Slave and I can’t help but be excited about Belle, in spite of the romantic inflections, and I hope that the projection of modern fantasies about the experiences and sufferings of real people does not replace the excavation of those harder to find histories. There are of course things that we may never know, but that doesn’t mean that we should stop looking.
at 08:41 No comments: