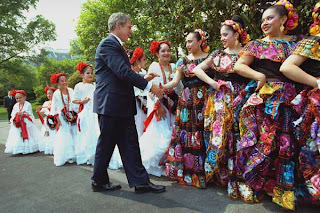 George Bush hosting Cinco de Mayo celebrations at the White House, 2001
Cinco de Mayo - mean anything to you? Chances are it doesn't, since May 5th celebrations haven't really made much of an impact this side of the Atlantic. In America, however, Cinco de Mayo has become a significant occasion for the celebration of Hispanic culture. In its origins, Cinco de Mayo commemorates the Battle of Puebla in 1862, a victory for the Mexican Army against occupying French forces. In its modern form, it has become a more general Latino celebration (commonly confused with Mexican Independence Day), marked with much greater vigour in America than in Mexico itself. In part, this is the result of good marketing. Beer and tequila companies have been keen to establish Cinco de Mayo as something akin to St. Patrick's Day. Yet marketing aside, it is apparent that Cinco de Mayo has become a notable date on the calendar, and not just for America's 45 million Hispanics. This year, George Bush, who has previously held Cinco de May events at the White House, released a statement to mark the day: "Today, we remember these heroic accomplishments and all those working to advance peace and liberty around the globe. This holiday is also an opportunity to recognize the strong ties of family, economy, and culture that bind the United States and Mexico."

Thanks for the reminder, you could say I'm a little homesick (San Antonio, Texas) these days. Cinco de Mayo is widely celebrated there, and not just on the 5th, but over several days. In San Antonio, even "los gringos como yo" don't confuse El Diez y Seis de Septiembre with El Cinco de Mayo. What's really wonderful, from a cultural perspective is how distinctly these celebrations reflect the Tejano/Tex-Mex identity of the population. For example, alongside traditional Mexican music like mariachi and rancherra, one will find the more ubiquitous local styles of tejano and conjunto. And the food. Well, you ain't had real Tex-Mex til you've had a dish of carnitas with homemade white corn tortillas after a couple of (authentic) margaritas for starters. But it's also our language and mannerisms, and typically laid back, "it can wait for mañana" attitude about life.

You'll also find many vibrant celebrations during the less city-wide popular Día De Los Muertos (day of the dead), especially in the art districts which border the old Spanish missions and the city's 400 year old Mexican South Side.

That's not to mention the two week long party of parties which collectively have come to be know simply as, "Fiesta San Antonio" which rivals Mardi Gras New Orleans (pre Katrina) without the debauchery.

btw, we love the new blog banner on your site.