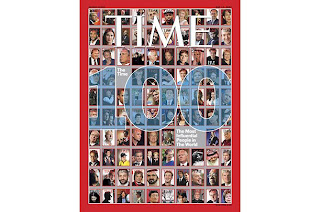 To commemorate the fact that Containing Multitudes is 100 posts old, we're turning the spotlight on the recently released Time 100 2008 - a list of the year's most influential people. The results are typically surprising. The "winner"? Japanese video game designer and the power behind the Nintendo Wii, Shigeru Miyamoto. Second? Korean pop-star Rain (last year's winner, no less). Next up? Satirical comedian Stephen Colbert. The full list can be found here (though it still seems to be in a state of flux). Who would you put at the top of the list?

UPDATE: Colbert has been having fun with his defeat to Rain...