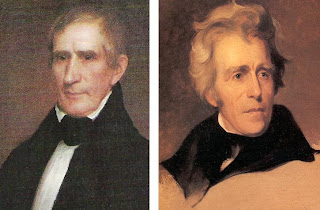 William Henry Harrison, Andrew Jackson
As excitement builds for Tuesday, the spotlight is being turned on inaugurations past. LiveScience has a run-down of its picks of the "Best Inaugural Addresses Ever." But perhaps unsurprisingly, it's two inaugurations from the nineteenth century that are getting the most attention. The first is the inauguration of William Henry Harrison, whose lengthy inaugural address in inclement weather in March 1841 led to his death from pneumonia (more here from the Library of Congress). More fun, however, was the inauguration of Andrew Jackson in March 1829. The White House was the scene of a public reception, and, as this eyewitness account from Washingtonian Margaret Smith demonstrates, things got a little out of hand:

The President, after having been literally nearly pressed to death and almost suffocated and torn to pieces by the people in their eagerness to shake hands with Old Hickory, had retreated through the back way or south front and had escaped to his lodgings at Gadsby's.

Cut glass and china to the amount of several thousand dollars had been broken in the struggle to get the refreshments, punch and other articles had been carried out in tubs and buckets, but had it been in hogsheads it would have been insufficient, ice-creams, and cake and lemonade, for 20,000 people, for it is said that number were there, tho' I think the number exaggerated.

Ladies fainted, men were seen with bloody noses and such a scene of confusion took place as is impossible to describe, - those who got in could not get out by the door again, but had to scramble out of windows.

More available here from Eyewitness to History. And below, a contemporary print, "All Creation Going to the White House": 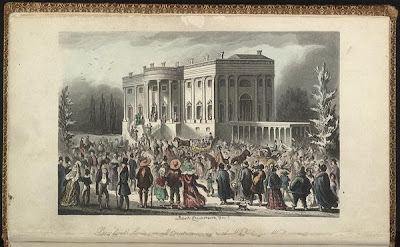 Andrew Jackson also received a 1,400 pound block of cheese and, after aging it for two years, invited the public to eat it - it went in 2 hours.