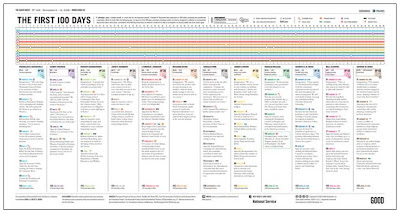 This is neat: in preparation for the inauguration, Good Magazine has put together a pictorial representation of the first 100 days of every American president since FDR, marking off the significant moments of that crucible time. Here's their own blurb:

“I pledge you, I pledge myself, to a new deal for the American people,” Franklin D. Roosevelt told supporters in 1932 while accepting the presidential nomination. When he took office the following year, he spent his first 100 days enacting a dizzying number of reforms designed to stabilize an economically depressed nation. Since then, a president’s first 100 days have been an indicator of what he is able to accomplish. In January 2009, the clock starts again.