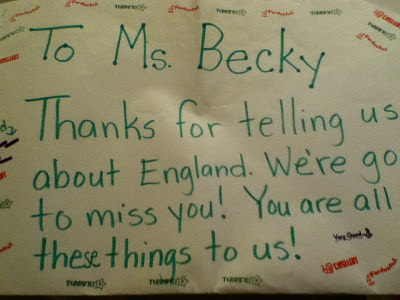 A farewell letter from students at one of the Schools where I conducted my research.

I am a second year research student from Los Angeles, CA. I moved to Norwich in 2010 to complete my Masters degree in the School of Political Social and International Studies, but having such a keen interest in U.S. Politics and contemporary race relations within the U.S. I turned to the School of American Studies for the PhD. I first visited Norwich in 2008 when I came to the UEA as a semester abroad student from my home university in Walla Walla, WA. I loved Norwich and UEA so much that I just had to return. After the PhD the dream is to maintain a career within academia in hopes to keep the anti-racist discourse alive and well. This Spring I will be heading to Temple University's annual James A. Barnes postgraduate conference to present a portion of my research to fellow graduate students and fellow Americans. Below is a summary of the paper I will be presenting in the United States.

Research Paper: ‘The Browning of America & the Impact on Public Education’

Delving into the history of the American public school and previous responses to increased racial and ethnic classrooms, my research considers the ways in which an increasingly multicultural student body might impact American approaches to education in the twenty-first century and the ways in which current curricula, school policy and pedagogy might shape a new intercultural generation. My research documents three majority-minority public elementary schools in Los Angeles, CA.  Over the course of three months, between August 2012 and November 2012, the on site research assessed how cities and schools with majority-minority populations situate cultural differences, language barriers and student integration within the school.


A student self-portrait & a set of multicultural skin tone crayons issued by one of the schools. A major aspect of the research was considering the student's race consciousness.

At its core, the research considers what is actually taught on a day-to-day basis within set classrooms and how this is internalized by students, staff and administration. It situates the classroom experience within the wider context of the city (Los Angeles as a beacon of cultural diversity), local school and district debates (issues of funding, teacher cuts, etc.) and the local and national 2012 elections (Where does education go from here?).  Finally, the research highlights the voices and experience of teachers, students, administrators and educational researchers. 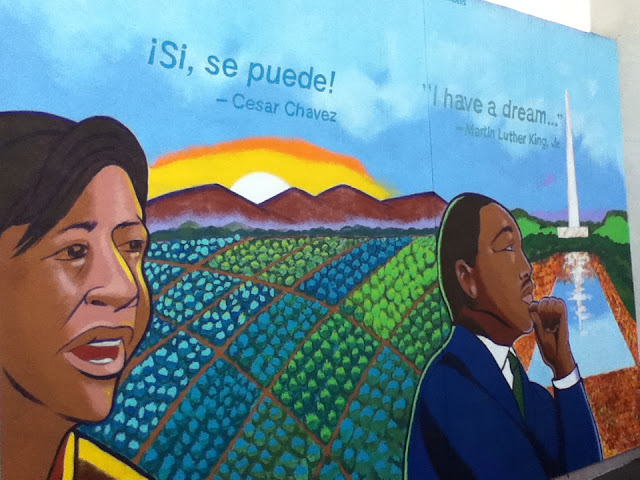 A photo of a handball court on the school playground featuring Cesar Chavez and Martin Luther King Jr. I paid particular attention to the heroes celebrated by the schools and whether such heroes resonated with the school demographic and the community's local history.