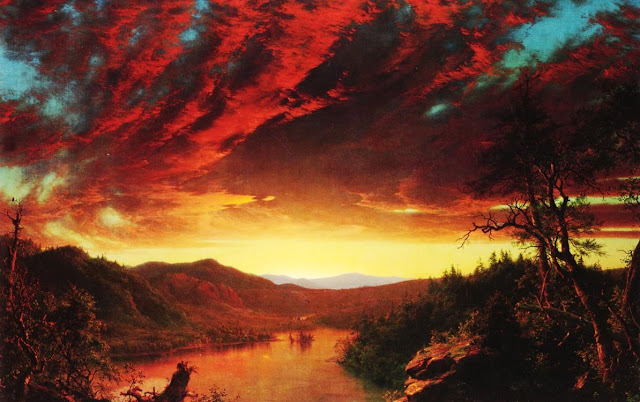 
Reading the news a few weeks ago, I discovered that the British government had placed a temporary export bar (expiring 7th April) on Jasper Francis Cropsey's painting Richmond Hill in the Summer of 1862. The government needs to raise almost £5 million to keep this canvas in the country. Since the National Gallery has an unusual, related exhibition currently showing, I think this is an important and easily overlooked moment in the spotlight for American art in Britain.

The last English owned Hudson River School canvas, Frederic Edwin Church’s The Icebergs (1861) was allowed to leave England in 1990. According to Sotheby’s, Hudson River School canvases are among the most consistently reliable for sheer monetary appreciation. So it seems extraordinary on several counts that if Cropsey’s Richmond Hill is allowed to leave the country we have only one representative canvas left in the UK.

If you visit the National Gallery in London before April 28th you can see some beautiful oil sketches by Church and the perhaps soon to be last  canvas remaining in the UK, Church’s huge Niagara From the American Side canvas of 1867, which is on loan from its home in the National Galleries of Scotland in Edinburgh. This is an extremely rare opportunity.

The most recent exhibition of these canvases outside the UK was Tate Britain’s American Sublime exhibition in 2004, which brought many of the most important Hudson River canvasses to London for the first time. Yet transatlantic connections to the Hudson River School are strong, especially between Thomas Cole, who was born in Lancashire but emigrated to the United States as a teenager, and his student Frederic Edwin Church. So why are these pictures so under-represented in British galleries?

A comparison of Cole and Church’s work quickly reveals Church’s unprecedented deep personal familiarity with the American landscape. The oil sketches on view in the National Gallery right now can evoke a sense of the American geography without having to depict it in any detail, and the sensational response his canvases elicited in the United Kingdom only underscore to his power to represent the American landscape at a pivotal moment in the nation’s history.

Church’s sketches from his travels to Labrador, Jamaica, the Middle East, western Europe and the Andes highlight the cosmopolitan character and international importance of American art in the Mid-nineteenth century, as well as the physical extremes artists like Church and, later, Albert Bierstadt and Thomas Moran went to to be the first to paint the North and South American continents.

I’m working on American literature from the mid-nineteenth century for my PhD, and especially given the dearth of photographs from this time I personally find that these paintings form a striking visual context for their contemporary literature. Church’s oil sketch of a campfire in the Maine woods was made only a few months before Henry David Thoreau took an excursion in the very same area, his account of which was later published in The Maine Woods. I like to think they may have run into one another along the trails, or maybe the campfire site was used by Thoreau’s group as they passed through..

The exhibition is free to view and is on display until 28th April.

Joanne Mildenhall is a first year PhD student in the School of American Studies. Her research centres on the study of philology, nationalism and cultural hybridity in antebellum American literature, particularly in the work of Henry David Thoreau.