Letter from America - an occasional series of posts by students on their Year Abroad in America.

Hi. My name’s Tom. I am currently studying abroad at the University of North Carolina in Chapel Hill. I could go on about how wonderful it is here, how many bluegrass and country gigs I am going to, how much fried chicken and sweet tea I am consuming, etc. etc. Instead, I am going to tell you about when I went to the State Fair in Raleigh, NC’s capital.


They have much smaller County Fairs elsewhere in the States, but my understanding is that State Fairs are an especially Southern thing.  I went with three of my international friends (Nick, Australian; Kristina, Danish; and Richard, German) and one American friend (unavoidable – international students don’t have cars!). We made the rookie error of going on a Saturday night (the Fair goes on for about two weeks), and so it was absolutely heaving.

Of course, making sweeping statements and unfounded extrapolations from such an extreme setting would be daft. Naturally, I shall do it anyway.

The Fair itself takes place in a specially built area called (surprisingly) the State Fairground. We had to wait about half an hour to get tickets to get in. When you go in, you go through a pavilion bit, which we quickly looked around. They had rows of cabinets with the entries to cooking and craft contests. Prizes had already been awarded. So far, so gentle. 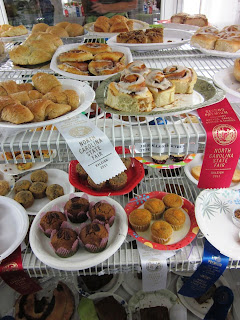 Of course, through the pavilion and into the fairground itself, the fair proper was not so gentle. 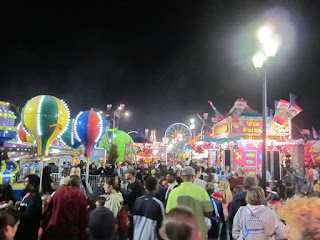 I’ve never been to a fair of this size. Of course, some things were familiar, such semi-rigged games offering giant stuffed animals as prizes (yes, I think that is a Rastafarian Winnie the Pooh second from the right): 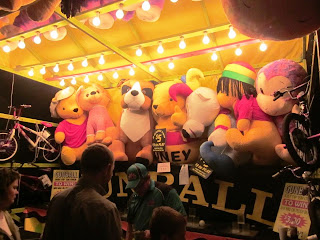 As foreigners, we particularly enjoyed anything themed. Here is Richard enjoying the “Fun Haus”: 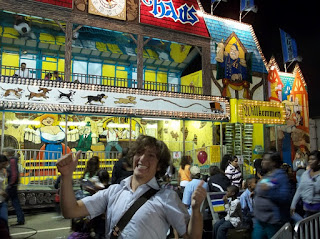 He actually went up to the people running “Der Pretzel Haus” to tell them that it should be “Das”. And cut a massive line (queue) to tell the bewildered operators of the John the Greek Pizzeria (as if that wasn’t confusing enough) that flying Hungarian (rather than Italian) flags didn’t make any sense. 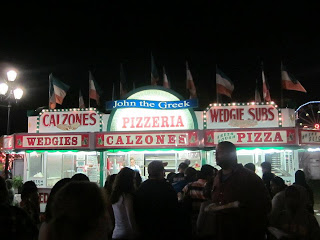 Wonderfully, the woman he asked simply replied “Does it have to make sense?”

Aside from inaccurate European themed stalls, they also had more old-timey attractions, such as (reportedly) the world’s smallest horse. 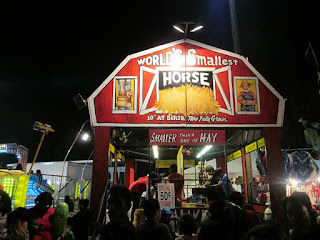 They also had the world’s largest horse somewhere else. Can you imagine the rivalry?

And if that wasn’t enough: 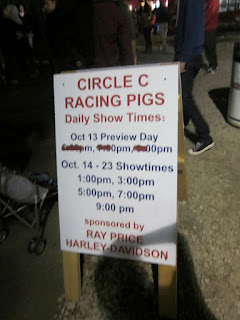 Yeah, they’re pretty big on pigs here in NC. The main traditional dish is “barbeque”, which is not what what you think. It’s a whole pig cooked for a day. It’s delicious. It also really confused Nick, who is Australian. No, we didn’t see the race. The seating was full and there was still about half an hour to go until the race!

This wasn’t the key component of the Fair though. The main thing we got told/warned about whenever we mentioned we were going to the Fair was the deep fried foods. Deep fried anything you could imagine. Fried cheese cake was pretty good, actually:
As you can see, fried Twinkies were also available. As we wandered around some more, it got a bit ridiculous. 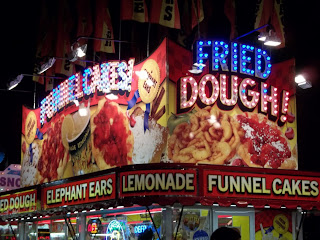 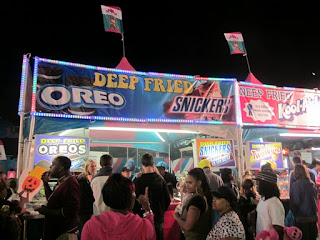 But the most extreme thing we saw, food-wise, was the stall selling Krispy Kreme burgers. 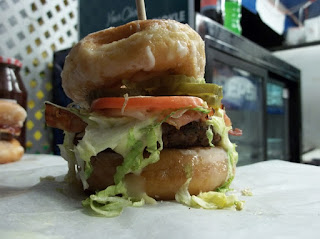 Yeah, you read that right. It’s a burger between two Krispy Kreme donuts. The one pictured above was Nick’s. Torrey, our American friend who was with us, warned us under no circumstances to get salad. Nick wanted to do it properly, so ignored the advice. More fool him. 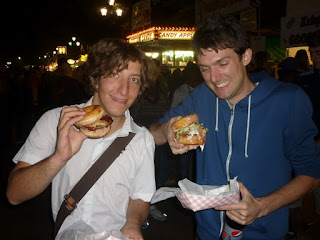 Richard’s burger had peanut butter jelly on it. Yes. I know.

No, I didn’t get one. I was reliably informed that they were as disgusting as they sound/look. It’s also important to note, in connection with my earlier statement about generalisations, that most Americans we spoke to found them disgusting too. But still, they exist, and there is obviously a market for them. Even if it is just incredulous international students.

Afterwards, we went on the fairground rides. The food did not agree with this decision.

It’s important to note how large this fair was. It seemed endless, with the same basic three or four elements (oh look, deep fried oreos! Stuffed animals! How about someone trying to guess your weight?) repeated over and over. Some clichés are true, and America really is on a much bigger scale than anything in the UK.
It was wonderful in a glorious, trashy, neon, OTT kinda way.

The whole experience seemed so quintessentially American, specifically Southern, which is why I thought it would be a good thing to write about for the AMS blog. I want to leave you with something that I saw that could only happen in the USA: 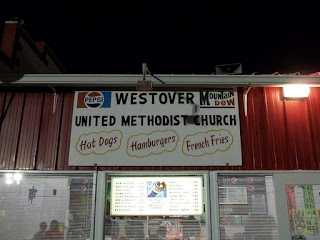 Yes, that’s right, a church-run fast-food joint (note the soda brand logos!). This was one of a whole row of them, basically selling the same food, run by different churches. If you’re studying American Studies, you’ll probably have the same reaction I do to these sorts of things: ah, America. So much wrong with you, but man are you fascinating.

PS If you’re an AMS student thinking of studying at UNC, email me and I can tell you about more of the day-to-day stuff.

[Pictures courtesy of Kristina, Richard and Nick. Yes, I am doing my year abroad without a camera. Yes, I know.]