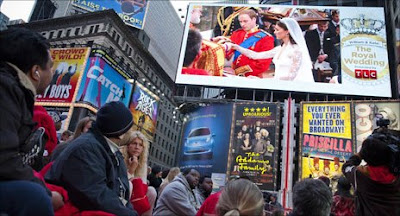 by Liam Heffernan
On Thursday 28th April 2011 Alabama and the southern states were hit by a storm killing almost 300 Americans. It was 'the worst tornado outbreak since 1974' leaving thousands of people homeless and over a million without power. The following morning, I was sitting in a hostel in downtown Boston trying to see the news through the heads of old ladies huddled around the television (it was an odd place).


Friday morning and droves of news anchors and correspondents from all major networks (including Fox, CNN, ABC, and CBS – see what I did with the title? Journalism at its best) were brought together in what was one of the biggest news days in recent years on American television. People throughout the country woke early in the morning to see the event unfold live, and for the remaining two months in the States there was only one question I was asked:
"Did you see the royal wedding?"
Sadly, yes. I did see the royal wedding. Everyone saw the royal wedding. In a cunning PR move usually reserved for unpopular political announcements, the storm chose to hit at a time when such unwelcome tragedy was relegated to the 'other news' because Kate Middleton in a wedding dress was far more important. For an infamously patriotic country, their fascination with the royal family never ceases to astound me. In an article published a few days before the wedding, the Huffington Post note how there was more news coverage of the wedding in the US than there was in the UK. I even had a lengthy conversation with a security guard in Atlanta who knows more about the history of our monarchy than most of us Brits do.
This post has no conclusion or profound academic point, and I remain perplexed at the irresponsible nonchalance with which the American news treated such awful tragedy in favour of a little old wedding across the pond. Throughout the morning of the 29th April, one of the worst natural disasters in the country since Katrina was nothing more than a distracting fringe story, but why was the wedding so important?
at 21:08

I'm the first to critique American media, but in this case, I don't think Liam has it quite right. I live in Boston. Many Americans watched the Royal Wedding with great interest, but likewise, we pay attention to our weather disasters (I notice that Liam didn't mention the Weather Channel, NPR or PBS, where much of our excellent news comes from). We anticipate seaonal hurricanes along the coast, as folks in the interior brace for tornados. We balance our joys with our sorrows just like every other country, and we indulge in momentous occasions, like the Royal Wedding. But one should not assume that because Americans watch a few hours of TV, (and curiously, were Liam's hostel companions even American?) that we are all apathetic. Where was Liam when news reporters broadcast countless stories of generosity following the tragedy? If Liam stuck around long enough he would have seen this side of America--the incredible outpouring of support from complete strangers from all over the country.

I don't think Liam's suggesting that all Americans are apathetic- of course there are many Americans who watch the better news channels and are well-informed. I think the purpose was not to make a sweeping generalization, but to comment on the state of the media and reflect on the effect this can have on people.

The highest ratings often go to channels like Fox- and they do tend to focus on meaningless, sensationalist stories, at the expense of serious reporting. And the Royal Wedding was hardly the most worrying case of disproportionate reporting.

I was in Europe when the Royal Wedding happened, and I was bemused at the excitement in many countries, not only America. But, whatever keeps the people happy I guess.

Sadaf, I do agree with you about American media, owned by a few capitalists, providing an American public with hundreds of TV channels often times filled with entertainment garbage at the expense of important programming. However, I do think journalists like Liam have to go beyond their surface-level snapshot observations and avoid the pitfalls of over-generalization. In this particular instance, to the credit of the major media outlets here, we watched consistent reporting regarding the storms, the victims, and the aftermath as well as the above-and-beyond assistance offered by so many. For weeks we saw this on TV. I remember feeling quite pleased by how thorough the reporting actually was. It seems that this piece of the story never made it to the UK?