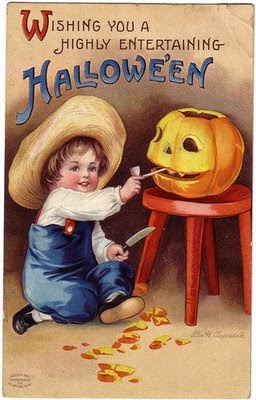 It's Halloween! Link round-up below.


A couple of picks from our editorial committee:

Nick Cleaver:
I’m not a big fan of Halloween and I don’t do horror movies which rather narrows things down for me. As usual, however, The Simpsons comes up trumps. Every year the Treehouse of Horror episodes come up with ingenious twists on horror staples. Highlights over the years include ToH5’s ‘The Shinning’, the computer animated Homer3 of ToH6, and the Orson Welles tribute ‘The Day the Earth Looked Stupid’ in ToH17. If I had to pick one episode though it would be Treehouse of Horror 7 – three great segments culminating in the wonderful ‘Citizen Kang’ in which recurring alien characters Kang and Kodos abduct Bill Clinton and Bob Dole before the 1996 election and take their places on the campaign trail. “As a young boy, I dreamed of being a baseball....”

Bev Cadby:
With Halloween fast approaching my motto is run for the nearest supermarket. However, if you are in training to become a domestic goddess here is a link that will help you make spooky spiders and pumpkin pies - good luck.