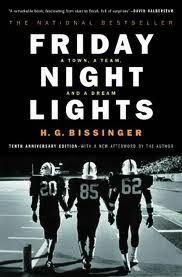 
Having been impressed by the film and then less so, as I thought, by the television series, I was ready to move on. Then, however, I was challenged and so saw out the rest of the first series on dvd. Now I have to get the second season. Unfortunately, I have to get it from America in the form of a region one disk, though there are solutions to that. You can't get beyond the first region in the UK so there is evidently no demand. Now I have also had to get hold of the book which began the whole thing, a New York Times number one bestseller as it turns out. As with THE WIRE, this is another case of a newspaperman taking time out and spending a year studying a particular community, in this case Odessa, Texas, population 100,000, a place, it seems, it is hard to be enthusiastic about, a place where dreams seem to have died, except that on Friday nights the dream comes alive when the high school football team plays its games and for an hour or so things seem possible. I'll come back when I have finished the book!

In other news, I see that the New York Review of Books has run a piece on Friday Night Lights by Lorrie Moore.
at 17:45