The Cool Kids: They Got the Dyno with the Black Mags 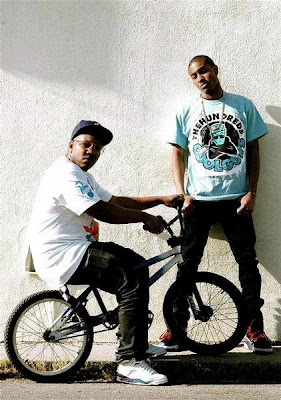 Hip Hop is a concept that carries multiple meanings. Perhaps because of this we feel compelled to subcategorise the genre endlessly. My iTunes player currently lists countless variations on the theme that is Hip-Hop: I have Old School, Hip-Hop/RnB, Electro-Hop, Cocaine Rap, Gangsta Rap, Crunk, Horrorcore, and Jazz Rap - and many more. Recently, though, something new appears to be cropping up all over the blogosphere and filling my computer with two interesting new subgenres: Hipster Hop and Hipster Rap.

To examine this new wave, we're going to concentrate on one of its main players. The Cool Kids have just dropped their first physical release (on a record label and everything) after amassing a vast internet created fan base. Despite reservations from some, the Bake Sale EP has been largely met with critical acclaim - critical acclaim, indeed, from particularly areas of the internet. Both pitchforkmedia.com and cokemachineglow.com gave the EP glowing reviews, meaning that their target demographics (young, white, educated and indie) who had somehow missed the hype became aware of them. The effect that this has on the market place is significant: it introduces individuals from social groups not traditionally affiliated with hip-hop to the medium. As Chuck, one half of The Cool Kids, notes: “That is probably the biggest accomplishment we could've done, to take people that wouldn't necessarily have been at a hip-hop show and they'll enjoy it, not just watch.” Cross over appeal has, for the longest time, been the mainstay of popular hip-hop, but this kind of underground momentum represents a growing area within American culture.

The internet has forced musical elitism into decline, it is hard to be obscurist when the freshest, newest and strangest underground music is merely a google search away. Independent music is, for the first time, so accessible that the tag has lost some of its former meaning. Indeed the only way to have truly au contraire musical tastes is to reclaim what was once considered uncool. Hence 80s nostalgia. Hence the bizarre cross genre spanning of MIA and Santagold (or anyone from the Diplo/Switch stable) and the current view that this is acceptable.

The Cool Kids are all about nostalgia and reclamation. Old School beats, “we’re bringing 88 back” and the classic tagline of “new black version of the Beastie Boys” cement their sound in a very specific period of hip hop’s development. Critically different are the thrust of The Cool Kids lyrics. Unlike most of the hip hop their sound emulates it is entirely without political agenda. Think Public Enemy without the enemy part. It seems that 21st century youth culture, particularly (though not only) in America, is growing increasingly uncomfortable with divisive, politically charged music. The war in Iraq produced few memorable protest songs; Barack Obama’s white house struggle has been marked by a wealth of rallying gigs but the music played lacks the head on qualities that typified 60s protest music (even if hip hop has responded to the campaign in a variety of ways); Live Earth was boring and hypocritical.

The Cool Kids fit into this ethos of apathy well. They bring an escapist element that is easier to bear then the grinding drones of ill informed, juvenile protest songs. Our generation’s protest is that of the basement party. In the face of impending economic crisis, hip hop shifts from a fetishism of money to a fetishism of cool. Gangsta Rap is over, and its logical conclusion is a more accessible form. Surely a band that calls themselves The Cool Kids are an evolution of the posturing of the last era. Whereas late 90s/ early noughties hip hop was often concerned with wealth, gain and the material, The Cool Kids are more transcendental. They even tease the intense jockeying that typified the last wave of hip (check: “I can go catfish fishing and come up with a whale”). The focus has become being cool, knowing what is cool before anyone else, being a cool kid. And The Cool Kids are cool kids.