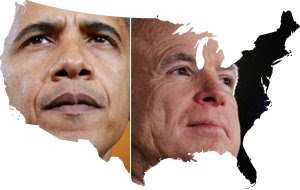 Everyone knows that today is the last step of a long journey, and the first step of another one. Containing Multitudes has been along for the ride, and you can review our extensive election coverage here. Attempting to summarise today's media storm would be quixotic. So instead, here's Larry David from the Huffington Post:

Five times a day I'll still say to someone, "I don't know what I'm going to do if McCain wins." Of course, the reality is I'm probably not going to do anything. What can I do? I'm not going to kill myself. If I didn't kill myself when I became impotent for two months in 1979, I'm certainly not going to do it if McCain and Palin are elected, even if it's by nefarious means. If Obama loses, it would be easier to live with it if it's due to racism rather than if it's stolen. If it's racism, I can say, "Okay, we lost, but at least it's a democracy. Sure, it's a democracy inhabited by a majority of disgusting, reprehensible turds, but at least it's a democracy." If he loses because it's stolen, that will be much worse. Call me crazy, but I'd rather live in a democratic racist country than a non-democratic non-racist one.

Stay tuned for an election day special.
at 07:59