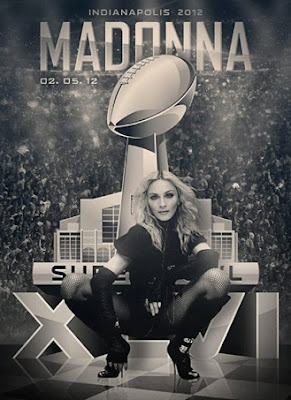 by Francisco Costa
On July 24, 2011, New York became the sixth, and largest, state to allow same-sex couples to marry. Two months later, following decades in which gay rights issues have divided American’s opinion, the end of the military’s “don’t ask, don’t tell” policy allowed gay men and women to serve openly. In February this year, following a year which suggested that Americans were becoming increasingly less tolerant of institutional homophobia, a gay icon will be the halftime performer at the Super Bowl show which airs to an average audience of 111 million viewers in America. This not only suggests that Americans are less tolerant of institutional homophobia, but of cultural homophobia as well. Thus, the importance of popular culture, and in particular of Madonna performing at the Super Bowl, is rooted in its ideological, social, cultural effects, and on its capacity to reconceptualise cultural norms and hegemonic values, by reinforcing sexual otherness.


The appropriation of Madonna as a gay icon results from her image transformations, liberated sexuality, sense of camp, and also from her support to AIDS causes. When officially announced that Madonna would be the halftime performer of this year’s Super Bowl, American media outlets’ reactions were mixed, with some claiming the NFL was reaching out to the LGBT community by booking the performer. ESPN enlisted the opinion of rock historian John Covach and branding strategist Adam Hanft, who claimed that Madonna does not only cross generations and sex barriers, but that she would also bring a larger gay audience to the event. With or without an agenda, the selection of this particular performer unarguably has effects.
Having a gay icon headlining an heterosexual masculinity’s national holiday and a very traditional Sunday to many American families brings together to what is considered to be an arena of heteronormative masculinity, where simultaneously homosocial behaviour is encouraged and homophobia is rampant, a queer aesthetic. Simultaneously, it also deconstructs gay stereotypes and contests dominant norms of masculinity, as it is often considered that homosexuality is incompatible with masculinity and a masculinizing institution as American football. Thus, the nation can be symbolised not only by large men crashing into each other, but also by an empowering woman symbol of subversion and transgression, and those two things can coexist quite cheerfully.
All in all, and to answer the question-title of this piece, not only Madonna, gay men and American football can go together, but more importantly their union can signify American’s changing attitudes regarding sexual identities, both institutionally and culturally. Nevertheless, America is still far from becoming La Isla Bonita.