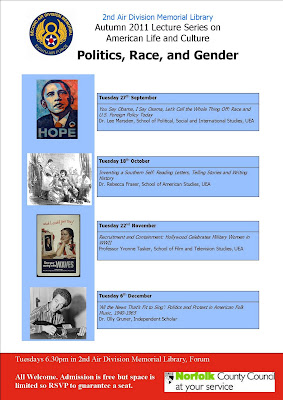 Above, a flyer for the forthcoming Autumn 2011 Lecture Series on American Life and Culture hosted by the 2nd Air Division Memorial Library at the Forum, Norwich - including AMS's very own Rebecca Fraser. Below, further details about the lectures. Enjoy!

Tuesday 18th October, 6:30-7:30 p.m.
Inventing a Southern Self: Reading Letters, Telling Stories and Writing History
Dr. Rebecca Fraser, School of American Studies, UEA
In September 1853 Sarah Hicks Williams, born and raised in New York State, honeymooned in Montreal following her wedding to Benjamin F. Williams, a physician and slaveholder in Greene County, North Carolina. The letters she sent back home to her mother and father in New Hartford from Clifton Grove, her husband’s plantation, revel the complexities and confusions of Sarah’s search for a southern self conforming to particular gender ideals of southern ladyhood and the expectations that came with the role of plantation mistress. This paper is not so much about Sarah’s life-story but the processes of writing history through reading letters, the means through which we understand and articulate a person’s life story through the letters that they wrote and whether just “telling their story” can and should be regarded as “history”.

Tuesday 22nd November, 6:30-7:30 p.m.
Recruitment and Containment: Hollywood Celebrates Military Women in WWII
Professor Yvonne Tasker, School of Film and Television Studies, UEA
During WWII Hollywood supported efforts to recruit women into military service, whether as nurses, marines, WACS or WAVES. Movies echoed contemporary recruitment campaigns in emphasising women’s service as patriotic, necessary but temporary. Both recruiters and filmmakers had to contend with negative views of women’s service, which some regarded as unfeminine or even amoral. This illustrated talk looks at some of the ways in which movies managed this, exploring the stories of military women in drama, romance, musicals and comedies of the period.

Tuesday 6th December, 6:30-7:30 p.m.
‘All the News That’s Fit to Sing’: Politics and Protest in American Folk Music, 1940-1965
Dr. Olly Gruner, Independent Scholar
From the Dust Bowl to World War II, from civil rights to Vietnam – mid 20th century America found some of its most outspoken commentators within its thriving folk scene. This talk takes a brief look at the history and politics of American folk music of the 1940s and 1960s. Jumping off from Woody Guthrie’s ‘This Land is Your Land’ and concluding circa Phil Ochs’ ‘Power and the Glory’, it'll explore the political activities of, and responses to, some of American folk’s greatest luminaries.
at 13:18