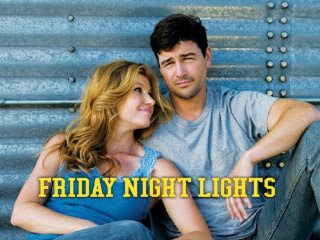 OK. Maybe I was a little harsh. I loved the movie and at first liked the TV series. Certainly the football coach was fully believable, as was the pressure exerted on him. It took me back to when I taught at a midwestern state university and used to receive the odd telephone call explaining that a quarterback had to pass his English course or where would the team be. This was at an institution whose president was quoted in SPORTS ILLUSTRATED as saying that a university is judged by its football team. So all of that was fully believable, as was the spirit of small town America. It was just that as the series developed so, to me, it became more of a familiar high school drama. I also have to admit that I have always had some difficulty with the idea of cheerleaders whose ambition, apparently, is to jump up and down in front of thousands of people and date testosterone-charged jocks with IQs in single digits. I can, however, understand why cheerleading is responsible for 65% of women's sports injuries. I take a certain perverse pride, though, in the fact that while football in the US dominates not only the university and the town in which it is located,and some university stadiums are larger than some Premier League ones, inter-university sport in the UK is liable to attract six people and a dog, or maybe that was just the sports I played at university -- judo and waterpolo! In the UK sport is for playing rather than a way of leaning on alumni for cash and a route to the professional game. FRIDAY NIGHT LIGHTS is particularly good, however, at dramatising the plight of those for whom football is the only future and for whom local fame is no guarantee of national attention. In that sense the film and the series are about the American dream, so enticing but also so prone to disappoint. So, OK, watch the series. The acting is excellent. The mood and spirit are pin-point accurate and it does offer an insight into the America that exists in the so-called fly-over states where in small town high schools a young man's ambition may indeed be to make his way into the state university team. To be truthful, it is not restricted to the small town. A young Arthur Miller was only interested in football until a knee injury ended that career, a fact echoed in DEATH OF A SALESMAN in which a young Biff Loman seems to have a golden future until it all goes wrong.
at 10:24