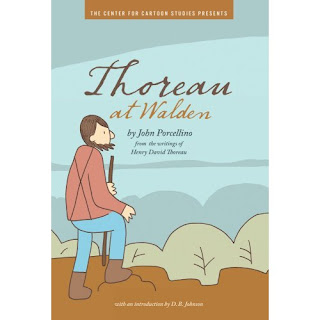 Following on from yesterday's look at three graphic adaptations of American literary classics, Containing Multitudes is very proud to present an exclusive account of the genesis of Thoreau at Walden by the book's creator, John Porcellino:

James Sturm of the Center for Cartoon Studies contacted me about doing a book on Thoreau for their series of American Biographies. As soon as he suggested it, I got very excited about the possibilities. Thoreau has been a major inspiration to me since my High School days, and to get the chance to immerse myself in his work and life, and then to try to bring that out in a way that would be accessible to contemporary readers was really a dream come true for me, pardon the cliché.

Thoreau at Walden isn't a straight biography, nor is it an adaptation of Walden. I think of it more as a kind of impression of his experience at the pond. The book is arranged, like Walden, into seasons, and covers "one year" of Thoreau's time there.

The way I put the book together was to read as much of his work as I could again, taking notes this time. I jotted down quotations and passages on index cards, and arranged them by theme: The Pond, Animals, Visitors, The Beanfield, Food etc. Then I set to work arranging the quotations into some kind of narrative stream. I used extracts from not only Walden itself, but also Thoreau's other writings. So one page might have a quote from Walden in the first panel, but a line from a later essay in the next. I tried to use only direct actual quotes from Thoreau's writing (I'd edit them a little, or adjust the punctuation if needed to maintain continuity between panels). In the end I only had to add a very few of my own words here and there, to keep things consistent. It was really important to me that the words be Thoreau's own.

Walden is such a dense, beautiful text, that almost every line in it could be fodder for pages of exploration. I tried to keep to the essence, and obviously there's a lot that that couldn't be included.

I looked at the book as a sort of collaboration, and I strove to do justice to Thoreau's work. It was a great honor to work on the book. Having spent much time in the woods and fields myself, throughout my life, I tried to bring my own experience into the book in certain ways, when it seemed appropriate. I know what it's like, for instance, to be out in the woods and get caught in the rain. I tried to imbue the story with those feelings and experiences, so that it would not only be about the words and ideas, but also the practical experience of being alive that led to those ideas.

Of course one can’t help but realize, in reading Thoreau nowadays, how vital and relevant his philosophy is to the contemporary world. I really wonder what he would have thought about the way things have gone. My hope with the book was to in some way bring this much-needed philosophy into a context that readers today would find accessible. And I hope that the book will inspire interested readers to explore Thoreau's writings further. He wasn't just about ideas, he put his ideas into practical action. We could use more people like Thoreau today!