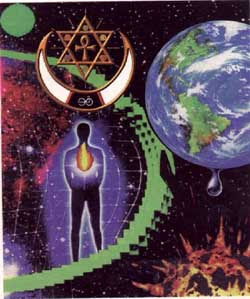 The actor Wesley Snipes was sentenced to 3 years in prison last week for tax evasion. It is said that Snipes claimed to have $8,824 in his bank account despite having assets of at least $25m; during the three years he filed no tax return, Snipes earned an alleged $13.8m, which would have made him liable for $2.7m in taxes.
Newsworthy in itself, the story has an even more intriguing side. It is widely claimed that the Hollywood star of Blade is associated with the Nuwaubians, said to be an arcane, quasi-religious, anti-government, anti-taxation sect. Is Snipes a Nuwaubian “tax-resister”?

More importantly, who are the Nuwaubians? This little-known organization, headed by Malachi Z. York, is said to have its origins in a black muslim movement back in the 1970s. Over time they have assimilated a dazzling range of (loosely) New Age beliefs and ceremonial imagery derived from ancient Egypt. According to the Nuwaubians, they are able to reach truth through the science of “Sound Right Reasoning,” a sort of linguistic mysticism.

According to the New York Times (14 January 2008), back in 2000, “Mr. Snipes sought a federal permit for a military training compound on land next to the Nuwaubian camp; the Bureau of Alcohol, Tobacco and Firearms rejected the request.” The alleged land deal has been the basis of attempts to link Snipes to the Nuwaubians since. Could the alleged association be the basis of Snipes’ tax troubles?

Any quick dip into the subject pulls up a bunch of interesting allegations. Widely-circulated assertions attributed to leading US tax specialist JJ McNab claim to link the Nuwaubians to a wider, loosely associated tax resistance movement in America, and seem to imply that the cult learnt tax-dodging techniques from a Montana-based anti-government movement. For their own part, the Nuwaubians hotly deny being anti-government or promoting tax-resistance at all, and insist that they are law-abiding - see their own site, here, or this repudiation:

Whatever the truth about the more bizarre end of this debacle, Snipes’ legal team successfully defended him against the most serious charges brought against him, including fraud and conspiracy, and he was eventually convicted on the lesser charge of failure to file a tax return. However, probably reflecting the opinion of prosecutors that he was a "notorious" and "inveterate" offender Snipes was given the maximum penalty of 3 years imprisonment.

Firstly, Wesley Snipes is not Nuwaubian nor is he associated with them. He does study and practice Kamitic theology amongst other things, but he denies having anything to do with the nuwaubians. Secondly, even if he was, the Nuwaubians and their founder DR. Malachi Z. York are not opposed to taxes, in fact York speaks about the importance of paying taxes saying "it's supporting things that we need".