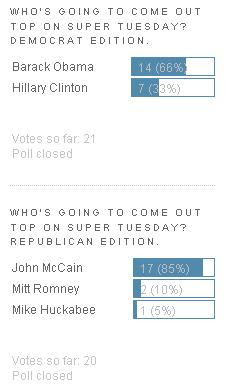 The results are in - and, as you can see, it turns out that your opinions weren't a bad reflection of the way things turned out on the night. The New York Times has a continuously updated results table here. AMS blog voters predicted a big win for John McCain, and he certainly had a good night. But only one lone voice in the wilderness seems to have had faith in Huckabee's pull in the south. For now at least, the race continues. Mike Madden analyses the Republican primary campaign for Salon: "The GOP chases its tail." McCain's victory looks inevitable now, but things are still very unclear on the Democratic side of the fence. AMS blog voters clearly gave the nod to Obama, but things were nowhere near that decisive. Most analysts are calling it a draw. Patrick Healy analyses events for the New York Times, here.
Reactions? Share them in the comments.
at 13:11