In an ongoing series for the AMS blog, Andy Rudalevige offers his insights into the latest election developments:

The South Carolina primary was split this year, with the Republicans voting on January 19 and the Democrats this coming Saturday, January 26. GOP voters in the Palmetto State – boosted by independents who chose to enter the primary – gave Sen. John McCain a 33%-30% victory over Gov. Mike Huckabee, with Mitt Romney a distant fourth at 15%. Former senator Fred Thompson, from neighboring Tennessee, nipped Romney for third, but with only about 16% of the vote; while this was better than his showing in earlier contests, it didn’t bode well for wider success, and Thompson left the race shortly afterwards.

McCain, then, becomes Frontrunner rather than Independent Insurgent – but he now moves into a series of primaries that do not allow independent voters (those not registered as Republicans or Democrats) to cast a ballot. Since Huckabee won in South Carolina among registered Republicans (with his largest lead over those describing themselves as “very conservative” – see here). the next several contests will test the scope of Republican loyalists’ tolerance for McCain’s brand of hawkish libertarianism. McCain holds a small lead in recent polls in Florida, the next primary (January 29) – see here. But here former New York City mayor Rudy Giuliani enters the fray for the first time, gambling that a good showing will make up for his low profile to date. Giuliani’s own past policy positions – pro-choice, pro-gay rights, pro-immigrant, before he was anti- all those things – may split the moderate Republican vote (which is a bigger, if quieter, factor in the party than is usually admitted by the British press.) 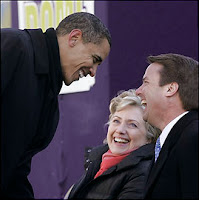 Interestingly, the role of independents is also key to the Democratic nomination. Sen. Barack Obama has attracted many new and unenrolled voters into recent primaries – but the huge array of contests on February 5, from Massachusetts to California, are, largely, closed to those voters (Georgia is an exception.) Further, intra-Democratic race issues came to the fore as the US celebrated the Martin Luther King, Jr., holiday, earlier this week. Obama has wrested an increasing share of African-American support from Hillary Clinton (whose husband was famously termed the “first black president” by Nobel novelist Toni Morrison.) This will matter greatly in Saturday’s South Carolina primary. But in the Nevada caucuses – where Sen. Hillary Clinton won the popular vote but at best split the delegates to be assigned in April – Latino voters were strongly (something like 2-1) in the Clinton camp. Los Angeles mayor Antonio R. Villaraigosa is an important Clinton supporter. Historically, the African-American and Latino communities have tended to compete rather than ally, and this could be troublesome for Obama as the vote-rich Southwest goes to the polls.

In each party, then, will voters divide or unite? Will they choose the candidate who can best attract the votes of uncommitted moderates? Or will purity win out? As my grandmother – and probably yours – liked to say, only time will tell…

Stay tuned for more election updates, and feel free to leave your own thoughts in the comments.
at 15:48