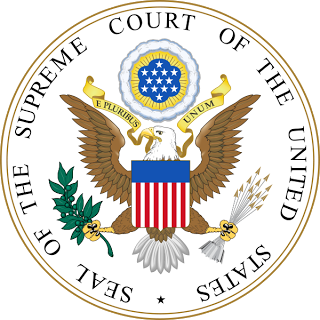 Having addressed race conscious university admissions on Monday and the Voting Rights Act on Tuesday last week (see previous posts here and here), Emma Long analyses the Supreme Court's decision made on Wednesday June 26, the final day of its term, in the issue of same sex marriage.  The two cases raised rather different issues and were treated quite differently by the Court:

The Case
US v. Windsor involved a challenge to Section 3 of the Defense of Marriage Act, enacted in 1996, which defines marriage as between one man and one woman.  Under the law, same sex couples who are legally married under the laws of their state were denied access to federal benefits and protections accorded to opposite sex couples.  The challenge was brought by Edith Windsor who, upon the death of her wife, Thea Spyer, received a bill for estate taxes totalling more than $360,000, a bill she would not have received had she been married to a man.  DOMA opponents, including Bill Clinton who as president signed it into law, argued the law discriminated against individuals on the basis of their sexuality.  Supporters of the law worried about what the striking down of DOMA would mean for the nature of families and the sanctity of marriage.

The Court
In another 5:4 decision, this written by Justice Anthony Kennedy, the Court struck down Section 3 of DOMA.  The majority did so on two grounds: the power of the states and equal protection.  States have long-standing authority to pass laws which govern domestic relations, the Court argued, and this includes the right to determine what does and does not constitute “marriage” within their borders.  DOMA trampled on that authority by seeking to impose a federal definition of marriage in certain circumstances.  This harm was compounded, the majority argued, by the fact that DOMA violates the Fifth Amendment’s guarantee of equal protection.  Kennedy wrote: “When New York adopted a law to permit same-sex marriage, it sought to eliminate inequality; but DOMA frustrates that objective ... DOMA writes inequality into the entire United States Code.”  In a series of emotive passages, Kennedy’s opinion argued that DOMA “impose[s] inequality,” “demeans” same sex couples by determining their relationships as “second-tier marriage,” “humiliates tens of thousands of children” of same sex couples, and “imposes a disability on a class by refusing to acknowledge a status the State finds to be dignified and proper.”  The combination of the infringement of the power of the state and the unequal treatment of same sex couples was, for five Justices, sufficient to strike down Section 3 of DOMA as unconstitutional.

Three dissents were filed by the four Justices in the minority.  Three Justices (Chief Justice Roberts and Justices Scalia and Thomas) argued that the Court did not even have the right to hear the case.  Because the Obama Administration had refused to defend the law, they argued, and because Windsor had won her case in the lower courts, there was no “controversy” here to be decided.  Deciding the case was, therefore, a major expansion of the power of the Court that was not justified by any provision of the Constitution.  Coming from Justices on the Court’s conservative wing, from whom expansion of power claims are frequent, this was not surprising.  However, coming the day after the Court’s decision in Shelby County v. Holder (striking down key provisions of the Voting Rights Act), in which Justice Ginsburg for the Court’s liberals accused the majority of extending the Court’s power by denying the will of Congress, Windsor shows that such arguments can be made by both sides when necessary.

On the substantive issues raised by the case the dissenters agreed: the Constitution does not speak to the issue of marriage and therefore can neither support or undermine the right to same sex marriage.  Because the Constitution is silent, properly elected legislative majorities may decide either for or against.  Congress chose to support opposite sex marriage in DOMA which, the dissenters argued, was perfectly legitimate under the Constitution.  For Justice Alito, asking the Court to protect same sex marriage was asking it to protect “a very new right,” one where the consequences have yet to be seen (and thus, implicitly, viewing same sex marriage as somehow different from opposite sex marriage).  Justice Scalia employed sharp and pointed language to argue both that the government may “enforce traditional moral and sexual” norms and that, contrary to the majority’s claims of discrimination, there are “many perfectly valid – indeed, downright boring – justifying rationales for this legislation”.

The Case
Hollingsworth v. Perry came from a challenge to a California initiative, Proposition 8, which banned same sex marriage in the state.  Prop.8 was passed, by public vote, in response to a California Supreme Court decision which held that limiting marriage to opposite sex couples violated the state constitution (thus opening the way for same sex marriage in the state).  As the case made its way through the lower courts, however, the state government refused to defend the law.  In order to bring a case in court there must be a live controversy: without anyone to defend Prop.8 there was the chance that the case would be dropped.  Individuals who had been instrumental in the campaign for Prop.8 intervened in order to defend the law.  As argued before the US Supreme Court in March there were thus two issues for consideration: the broader issue of whether California, having once permitted same sex marriage, could then remove that right, and the narrower, technical issue of whether Prop.8’s supporters even had the right to defend it in court (a requirement known in legal terms as “standing”).  The outcome of the case had the potential for far broader consequences than US v. Windsor: some commentators had hoped that the Court might use this case to strike down all restrictions on same sex marriage.  Given the Court’s precedents this was undoubtedly overly optimistic thinking, but there was a chance that the Court would at least decide the status of same sex marriage in California which might then open up possibilities in other states.

The Court
In the end, the Court ducked the broader issue in favour of deciding the case on the narrow, technical grounds.  The proponents of Prop.8 had no standing to bring their challenge, according to the 5:4 majority; if the state chooses not to defend a law, private parties cannot simply stand in its stead.  As a result, the appeals to both the lower court of appeals and the Supreme Court were held invalid and the case was returned to the lower courts.

The Significance
The practical implications of both Windsor and Hollingsworth are significant but, in some ways, rather limited.  With the demise of Section 3 of DOMA, same sex couples whose marriages are recognised in their home states will now be eligible for the same federal benefits and protections as opposite sex couples.  For those involved the financial and security impact may well be significant (as, for example, the first granting of a permanent residency visa to the Bulgarian husband of a Florida man on Friday afternoon or Edith Windsor receiving a refund of the estate tax she paid).  As a matter of law, however, the impact is less major, applying only to the 1000 or so federal laws governed by DOMA.

And despite Justice Scalia’s warnings in dissent in Windsor that this case will ultimately lead to a broad requirement that all states permit same sex marriage, the majority stated this was not the case, holding the ruling applied only to those states which already permit same sex marriage.  The Court’s decision did not challenge Section 2 of DOMA which gives states the right to refuse to recognise same sex marriages performed in other states and clearly made no explicit statement about whether states should permit same sex marriage under their own laws.  Thus, couples who marry in one state and then move to another may still run into difficulties under this rationale.

This is reinforced by the Court’s handling of Hollingsworth.  Many had urged the Court to use the case to require states to recognise same sex marriage, or at least to make a strong statement in its favour.  Deciding the case on narrow, technical grounds, without addressing the substantive issues, implies that the Court has gone as far as it is currently prepared to with its ruling on DOMA.  In effect, both Windsor and Hollingsworth ensure that, for now, the issue of same sex marriage remains a debate to be had at state level.

If subsequent events in California are anything to go by, those debates will continue apace.  Following the Court’s ruling on Wednesday, the Ninth Circuit lifted the ban on same sex marriage on Friday.  Several couples, including those involved in Hollingsworth, married Friday afternoon.  On Saturday Prop.8 proponents appealed to the Supreme Court to ban such marriages until at least the deadline for appeals to Court rulings had passed.  On Sunday Justice Kennedy refused that appeal, meaning same sex marriage remains, at least for now, legal in California.

But the impact of these cases goes well beyond the narrow legal principles established.  As the majority and dissenters in Windsor noted, same sex marriage is an issue of much current debate and the astonishing growth in public support for same sex marriage in the US will ensure that continues.  But now it will continue with at least one Supreme Court precedent that, in its language, makes some very strong statements about the value and validity of same sex marriage.  This in a nation where state laws making it a “crime for two persons of the same sex to engage in certain intimate sexual conduct” were only struck down in 2003 (notably enough, exactly ten years to the day before Windsor and in an opinion also written by Justice Kennedy – see Lawrence v. Texas).  And where, as recently as 1986, the Supreme Court could characterise a challenge to one such law as a claim to a “constitutional right of homosexuals to engage in acts of sodomy” (Bowers v. Hardwick).  In this light, the Court’s decisions in Windsor and Hollingsworth are quite remarkable and speak volumes about the impact of the campaign for gay rights in the United States.  The debates will continue, but in the push forward it is worth taking a moment to consider just how far things have already changed.