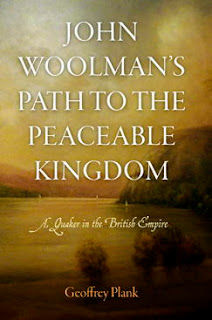 Professor Geoffrey Plank’s new book John Woolman’s Path to the Peaceable Kingdom is now available from the University of Pennsylvania Press. Christopher Brown of Columbia University describes it as “a carefully researched and quietly brilliant work that provides a genuinely new perspective on a familiar figure in the history of antislavery. Plank finds in Woolman not only an early opponent of slavery but also an ardent critic of most every facet of commercial life in the Delaware Valley and, more generally, the British Empire.”

Prof. Plank will be giving talks on his book on the following dates:


More details will be posted as they become available.

Geoff Plank has added two more events to the schedule of his early October trip to the Philadelphia area.  He will be giving the following talks connected to his new biography of John Woolman: