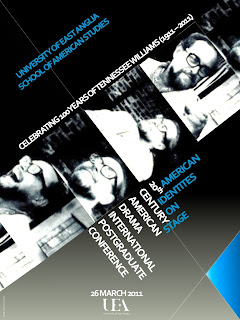 Things are going to be a little quiet around here over the next semester. But fear not: we'll be back in full effect come 2011. In the meantime, expect news snippets like this. The School of American Studies is very excited to be hosting an international conference marking the centennial of Tennessee Williams. You can find out more information here or visit the official conference website here. Here's the call for papers:

On the day of Tennessee Williams’s 100th birthday, the 20th Century American Drama International Postgraduate Conference looks to revisit the theatre produced in the last century, considering a plurality of approaches from literary to theatre and performance studies, film, gender and GLBTQ studies, reflecting on the most recent critical and academic canon. Stressing the importance of Tennessee Williams, the conference hopes to be an international point of intersection for all those interested in Williams’s work and 20th century American drama in general. Topics of individual talks or collective panel discussions might include, but are not limited to:
The conference will commence with a plenary speech, followed by the different panels, and will conclude with a round table discussion, which will consider themes arising from the day. Please send a titled abstract between 200-300 words (for 20-minute paper presentations) and a brief CV to f.costa@uea.ac.uk by 17 December 2010.
at 11:20