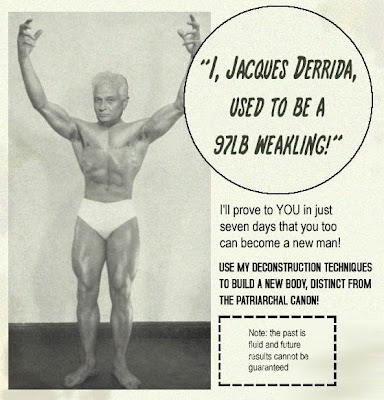 Translating Ecclesiastes: Some remarks on deconstruction, language, and thought

With regard to scholarly writing, authors generally fall into two camps: those who insist on the importance of articulating one’s ideas as clearly as possible, and those who claim that complex ideas demand a similarly complex prose style. Both camps are, to an extent, correct. Jacques Derrida’s Limited Inc demonstrates the tension between John Searle’s maxim “if you can’t say it clearly you don’t understand it yourself”, and Derrida’s commitment to linguistic uncertainty, an uncertainty he delights in incorporating into his prose. Critiquing the axioms underpinning language and questioning what it is to “mean” something is a tricky business, and is often necessarily abstruse; moreover, the rigorous critique of assumed critical axioms can be a profitable enterprise.

Nevertheless, this piece contends that scholarly writing is sometimes over-reliant on deconstruction, and this affects both the quality of prose and the quality of critical thinking. (Its title is a reference to George Orwell’s infamous translation of a passage from Ecclesiastes, which transforms the poetry of the original into stultifying abstractions.) An example: I have in front of me a book chapter, by Robert Stam, entitled “Beyond Fidelity: The Dialogics of Adaptation.” As a piece of writing, and as a piece of critical thinking, it is both persuasive (if overwrought) and unintentionally silly.

It is relatively easy to demonstrate the former claim. The chapter begins with a sensible, if pedestrian, discussion of the problems of fidelity in film adaptations, and makes the inarguable, if obvious, claim that the mechanics of film-making are necessarily different to the mechanics of novel-writing. There follows a summary of the tenets of deconstructionism, which for a novitiate to cultural or literary theory is confusing but is at least short. Where “Dialogics” really hits its laboured stride, however, is when its author proudly coins the phrase ‘diacritical specificity (59).’ (And the author really is proud of his creation: he calls it ‘A more satisfying formulation….’) This jargon is inexcusable for two reasons: firstly, it’s mentally horrifically taxing to parse; and secondly, the subsequent explanation of the term does little to elucidate it. To cut some prolix short, Stam’s coinage refers to film’s ability to marshal numerous visual and auditory resources, whereas a novel must stick to words.

Things get worse. In particular, one sentence ends with the pleonastic clause, ‘thus insinuating a deeper subterranean unity linking these apparently antagonistic characters (61).’ Deeper subterranean? As in sub-subterranean? How far below the Earth’s crust are we talking here? And I know that it’s stylistically clunky to use the same word repeatedly in a short space, but I am more than willing to grant an exception to Stam; to use anthropophagic to avoid repeating the word cannibalism tempts me to take the “death of the author” concept more literally than Barthes intended. I am not against complex, polysyllabic words, nor do I mind jargon, providing it’s not wincingly self-aggrandising. Often, one long word either saves writing several, or it offers precision of meaning that the latter cannot.

And so, as a proleptic response to potential “he who is without sin” type arguments, I will admit to being seduced by critical jargon. I once argued that, with reference to Thomas Pynchon’s The Crying of Lot 49, post-structuralist critical theory offered an opportunity for a culturally nourishing “ludic Luddism.” In my defence, however, I was gunning for assonance. Now witness the following sentence: ‘in the cinema the performer also brings along a kind of baggage, a thespian intertext formed by the totality of antecedent roles (60).’ Translation: actors have been in other movies; people watching a film will therefore remember their previous roles. What initially sounded recondite is now a facile observation of fact. It is the examination of how this “previous acting experience” epiphany influences an audience’s viewing of the film that is the most useful and interesting part of the paragraph, not the tortuous stuff that introduces and surrounds it.

This brings me to my second claim, that excessive recourse to deconstructionism negatively impacts critical thought. For decades, scholarly writing has incorporated the concepts of différance, presence/absence, readerly/writerly texts etc., and also the hellaciously turgid, pleonastic, euphuistic, and sesquipedalian prose style excerpted above. The grand old men of deconstruction don’t get a free pass here, but they are exculpated to some extent by dint of the fact that they articulated the theories first. The thing is, though, that the axioms of Western philosophy and literature have been rigorously scrutinized since the sixties, and it therefore becomes harder to create fresh approaches. Often the critical game feels rigged so that the conclusion is established before the premises: i.e. ontology is dicey, intertextuality runs riot, meaning is not fixed, and relativism is all that can be established. Against this backdrop, it is difficult to construct a novel interpretative opinion.

Stam’s chapter does a reasonably good job of wielding the aforementioned deconstructionist tools, and his insights, when stripped of their verbiage, have merit. His conclusion, however, is somewhat predictable, and sneakily disingenuous. He writes:

By adopting the approaches to adaptation I have been suggesting, we in no way abandon our right or responsibilities to make judgments about the value of specific film adaptations. We can – and, in my view, we should – continue to function as critics; but our statements about films based on novels or other sources need to be less moralistic, less panicked [sic, really?], less implicated in unacknowledged hierarchies, more rooted in contextual and intertextual history. Above all, we need to be less concerned with inchoate notions of “fidelity” and to give more attention to dialogical responses – to readings, critiques, interpretations, and rewritings of prior material (77-78).

Given that Stam begins by deconstructing fidelity, and continues to do so in various guises throughout the chapter, it is redundant to write, in case we hadn’t already noticed, that strict adherence to fidelity is not a good idea. But the sneaky bit of his argument is his reassurance that ‘We can… continue to function as critics’; the subtext of this statement is that our critiques must incorporate the same deconstructionist techniques that he uses. The critic always interprets a film through her subjective lens, which is influenced by race, cultural background, sexuality, etc. etc., all of which can then be deconstructed again. The “dialogical” approach that Stam argues for risks being internalized by the critic and her inbuilt prejudices; and the result is worryingly solipsistic.

Nevertheless, deconstruction is not itself evil, or damaging; it’s just a theory, and much like evolutionary or atomic theory it is often unfairly judged on the supposedly bad things it has produced. Yet its current usage tends to reproduce the same tired tropes again and again. Historical, social, and cultural contexts do tend to affect audiences in similar ways, and therefore reasonably confident critical assertions can be made. Yes, ambiguity is always going to be present, but, as Ezra Pound commanded, make it new. Then again, he was a fascist, and they tend to have definite opinions.