AMS student Emma Colthup spent her year abroad at Georgetown University in Washington D.C. - and here she is with Congressman Tom Petri: 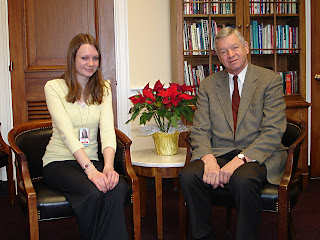 "While studying at in I had the opportunity to do an internship in the U.S. House of Representatives. I spent my Thursdays and Fridays for four months interning in the office of Representative Tom Petri from . I and five other interns did the usual intern tasks of answering the phone, replying to constituent mail, archiving letters and other material from the past two decades that the Congressman has been serving the house and giving tours of the U.S. Capitol building. Giving tours of the Capitol building was particularly interesting and amusing at times since I had to apologise a number of times for the British burning down the original building in 1814! My internship was such a great way to really see law making and politics in action. I got to find out a lot about how party politics and elections worked, as I started my internship just four days into the new 2007-2008 Democratic House. In addition, I got to attend one of the Congressman’s fundraisers, and see how the financial side of politics is important. I also got to learn a lot about American culture and the views of Americans through my conversations with constituents back in . It was especially interesting to learn their views on the war in and terrorism. About half-way through my internship President Bush proposed the troop surge in Iraq and the House put together a non-binding resolution (a statement not a law) declaring their objection. Congressmen Petri was one of only 17 Republicans to vote in favour of the Resolution. The heated response from his constituents and local party were amazing, but the numbers enthusiastically supporting him were quite remarkable too. Towards the end of my internship the Congressman took several of the staff, including me, on a tour of the dome of the Capitol building. You have to have a member of Congress with you to go on these tours so it was a really unique chance to see more of one of the world’s most famous landmarks. Altogether it was an amazing opportunity and made such a difference to my studies of ."