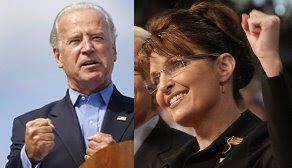 The policies, thoughts, moves and shakes of both Obama and Mccain have, in recent weeks, been overshadowed by their somewhat intriguing choices for Vice Presidential candidates. Joe “The Delaware Destroyer” Biden squares up against Sarah “The Lipstick Pit-bull” Palin in St Louis on Thursday evening. After a frankly lacklustre Presidential debate, we’re pinning our hopes on its Vice Presidential counterpart to be entertaining as well as enlightening.

The build up has already started and the gloves are coming off with both candidates preparing their game faces and providing us with some exciting pre-match sparring. Fears that Biden will have a slip of the tongue, or just become a very angry man, are certainly legitimate - although he has countered in his own idiosyncratic manner.

As for Sarah Palin, no one can be sure how she will perform as she is something of a newcomer to national political debating. She’s keen to prove her credentials as a serious candidate, though one would hope she performs in St Louis with more eloquence than in other displays. Looking back into her history reveals a tenacious but disarmingly charming debater and the Republican PR team have been quick to point out that she is "Queen of the Zinger."

Whatever the outcome the pairing certainly sets the stage for a lively debate. Teams Obiden and Mcalin have readied their competitors well and now all eyes are fixed upon the city of St Louis tomorrow evening for the big fight live.
at 08:28