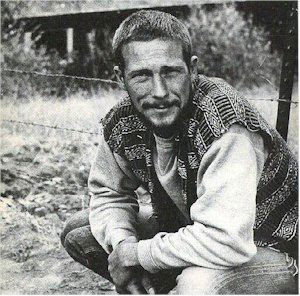 Each week, American Psyche will explore a region of the States that has become inextricably connected with one of the nation’s most famous poets, authors or playwrights. In the first installment, we look at the formative role of the Pacific Northwest in shaping Pulitzer Prize-winning Gary Snyder’s young mind.

So begins Gary Snyder’s ‘Night Highway Ninety-Nine’, a poem which charts his journey through the heart of America’s Pacific Northwest in early 1956. One of the poets to ‘jam’ at the famous Six Gallery reading the year before – a night that provided the most powerful manifestation yet of the Beat Movement, as well as heralding the emergence of the nascent San Francisco Renaissance – Snyder’s work nevertheless offered a noticeably different perspective to those of his colleagues that night. Unlike Allen Ginsberg’s vitriolic condemnation of contemporary America in ‘Howl’, for instance, Snyder was rather compelled by the natural landscape and man’s place within his environment, appropriately earning the title of ‘laureate of Deep Ecology’.

Despite moving to California, and later following his love for Zen Buddhism to the Far East, Snyder’s poetics were nevertheless formed from an early life spent in the states of Washington and Oregon. At Reed College, Portland (possessing the wonderfully nonconformist motto “Communism, Atheism, Free Love”), Snyder met Lew Welch and Philip Whalen. They formed an avant-garde triumvirate, and Snyder had his first poems published in the campus literary magazine, Janus. Yet it was his experiences away from urban America – at times as a logger, a fire lookout in the Cascade Mountains, and as an ethnographer spending time researching Native Americans – that resonate most strikingly in his poetry. The abstract ‘Pine Tree Tops’, for instance, acknowledges the overwhelming power of nature, within which man is merely a questioning component:

“in the blue night
frost haze, the sky glows
with the moon
pine tree tops
bend snow-blue, fade
into sky, frost, starlight.
The creak of boots.
Rabbit tracks, deer tracks,
What do we know.”

Snyder would later become an ecological activist and trained Zen monk, and this zealous spirituality is half-lauded, half-mocked in Jack Kerouac’s fictionalised account of him in the Dharma Bums. Indeed this portrayal of Snyder’s attitudes and values (not to mention his poncho, plaid shirt and jeans aesthetic) became, according to Beat critic Ann Charters, “a blueprint for the hippie culture a decade later” (The Portable Beat Reader, xxix). Laurence Ferlinghetti also playfully alluded to this temperament when identifying Snyder as the ‘Thoreau of the Beat Generation.’

Gary Snyder clearly occupies a more thoughtful and spiritually inclined counterpoint to such Beat figures as Neal Cassady. And yet ‘Night Highway Ninety-Nine’, like the classic Beat text, On The Road, is fundamentally a celebration of one of the key features of the American Dream, freedom: