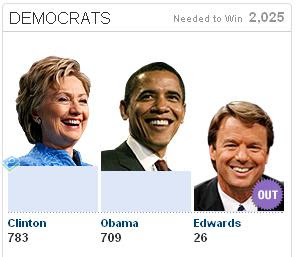 Twenty years ago, “Super Tuesday” broke onto the scene, with sixteen states holding their nominating contests in early March. Given that the single-day pile-up had resulted largely from a number of southern states moving their primaries up in concert, it was somewhat ironic that the beneficiary was Massachusetts Governor Michael Dukakis – who swept the northern states on the ballot while then Senator Al Gore and Rev. Jesse Jackson split the south. Such are the unintended consequences of electoral manipulation.

Likewise, this year the bunching up of more than 20 states on February 5 – more than a month earlier than the 1988 date then thought to be shockingly premature – was supposed to be the mechanism for ending the nomination races. Someone would spring to public attention during the four ‘table-setting’ contests in Iowa, New Hampshire, Nevada, and South Carolina, then run that table on Super Tuesday.

Of course, it hasn’t happened that way. On the Republican side it came closest. But though Sen. John McCain’s strong showing yesterday brings him halfway to the number of delegates needed to clinch the nomination, Gov. Mike Huckabee re-emerged as a factor in the race. Huckabee won five southern states including the largest, Georgia. Gov. Mitt Romney did manage to hold onto his adopted home state of Massachusetts – not a sure thing, given that during his four years as governor there he spent as much time as possible out-of-state saying insulting things about it – and he attracted 90% of the Utah vote. Otherwise his wins won him relatively few delegates. It is not entirely clear who is the “un-McCain” around whom conservative voters cold to McCain will coalesce – Romney has more resources, but Huckabee more grassroots enthusiasm.

On the Democratic side, the night ended in a virtual tie. Sen. Barack Obama won more contests, but Sen. Hillary Clinton the biggest states – California, most notably, where Latino voters turned out in huge numbers and favored her by a 2-1 margin. Still, the delegates in California (and some other states) are divvied up by Congressional district, so a statewide win in the popular vote may not translate into a win in the delegate count unless a candidate’s support is evenly distributed across those districts (53 of them, in California). By one count (CNN’s) Clinton leads Obama by 74 delegates – but even at that she only has 783 of the more than 2,000 she will need to win at the Democratic convention in late August. (Note too that some of those are so-called superdelegates – elected officials, mostly, who receive automatic delegate status at the convention, and who can change their minds about who they are pledged to…) It’s fair, then, to say the race is wide open. Next up: Kansas, Louisiana, and then, on February 12, the Chesapeake states, Maryland, Virginia, and the District of Columbia. And those states who “didn’t matter,” because they weren’t voting in February – like Texas and Ohio (March 4), and Pennsylvania (April 22)? They might be the kingmakers after all.