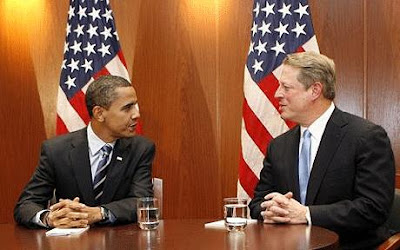 Barack Obama might have lost the olympics, but he has won the Nobel Peace Prize for 'extraordinary efforts' to improve world diplomacy and co-operation

Obama joins former Presidents Jimmy Carter (2002), Woodrow Wilson (1919) and Teddy Roosevelt (1906) in winning the prize. He is the third president to receive the award while in office, after Wilson and Roosevelt.

Jimmy Carter received the prize seven years ago for his international human rights work. Check out the Carter Center website.

Wilson won his prize for founding the League of Nations - although, ironically, the USA would not become a member of the organization. In 1919 Wilson became embroiled in a grueling battle with the US Senate over the issue and, while on a punishing tour of the nation to promote the League, he suffered a physical collapse and a debilitating stroke that left him partially paralyzed. A steely Senate nevertheless voted against membership in November.

Roosevelt’s part in drawing up the peace treaty that ended war between Japan and Russia in 1905 won him his prize. As everyone knows, the teddy bear is named after Theodore “Teddy” Roosevelt, but he was not a particularly cuddly character. He liked to project a tough, outdoorsy sort of image, and his Presidency is best known for his crusade against big business in the name of “progressive” liberalism. He is remembered today for his foreign policy aphorism “speak softly and carry a big stick” and he made a show of American military strength on the world stage at a time when the nation was emerging as a major power. Latterly, in 1912, Roosevelt became the combative Presidential candidate for the Progressive Party in his second run for the White House: he finished second behind future fellow Nobel laureate Woodrow Wilson.
at 11:52