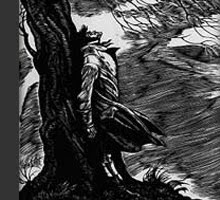 A date for your diaries: on Wednesday 11th November (in Lecture Theatre 4), everyone is invited to a private screening and discussion of A Regular Black: The Hidden Wuthering Heights, a 25-minute film examining the racial construction of Heathcliff.

The film is the creation of BBC Arena director Adam Low and producer Martin Rosenbaum, whose recent films for Arena include the The Strange Luck of V.S. Naipaul, The Hunt for Moby-Dick, T.S. Eliot and Calling Hedy Lamarr. Other films include The Pervert’s Guide to Cinema with Slavoj Zizek, described as “a virtuoso marriage of image and thought” by Variety and “an extraordinary reassessment of cinema” by The Times. For further information on LoneStar Productions you can visit their website, here.
at 17:23