One of the most dramatic moments in the history of the American Civil Rights Movement took place 50 years ago today, on 25 September 1957, when nine black students desegregated Little Rock Central High School in Arkansas. 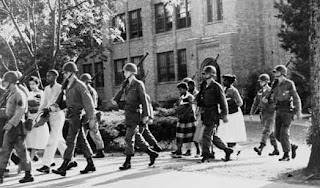 For weeks the pro-segregationist governor of Arkansas, Orval Faubus, had defied the law by ordering the state's National Guard to surround the school and prevent any black students from entering.

Finally the long stand-off was ended when President Eisenhower sent the 101st Airborne Division to Little Rock. On 25th September the nine students were escorted under armed guard past jeering white mobs and into the school.

In defiance of powerful southern segregationists the President threw the weight of the federal government behind the legal rights of the black students, thus helping to energize the emerging Civil Rights Movement. Occurring under the glare of national and international media publicity, the Little Rock crisis became an iconic and defining moment in modern American history.

Read more about America’s commemorations in the New York Times and the Washington Post.
at 10:28