On our MA module, 'Race and Resistance' (AMAS7019B), which is about theories of race and strategies of resistance within the Americas, our students have written blog pieces on their essay ideas!

Here is our first one, written by Charlotte, on the Art of Emory Douglas and Asali Gayle Dickson in the Black Panther Party: 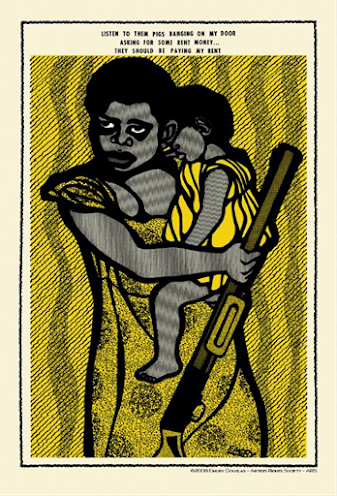 The Black Panther Party remains to this day a cornerstone in black American history. There were many facets to its resistance of socioeconomic and cultural power structures: armed citizens’ patrols, community social programmes, and public rallies designed to inspire and educate black citizens to name a few. One other such facet is art.

My essay will explore the artwork of the Black Panther Party during the period 1965-1975, assessing how art was used as a form of resistance (particularly in its portrayal of African American women and their resistance to dominant power structures). The focus is on the work of Emory Douglas and Asali Gayle Dickson: the party’s Minister of Culture and a lesser-known female Black Panther artist, respectively.

Artwork from both of these artists featured in the party’s newspaper The Black Panther, which at its peak reached some 400,000 readers. Functions of the paper included spreading the party’s ideologies, sharing Black Power theories and promoting the party’s 10-point-program. Illustrations provided by Douglas and Asali (more so later on; Asali’s prominence increased as the gender dynamic within the party improved) aided the communication of these, the more expressive format being easier to digest for a readership which struggled with low literacy rates. Indeed, Douglas argued that revolutionary art “gives the people the correct picture of our struggle whereas the revolutionary ideology gives the people the correct political understanding of our struggle.”(1) The art, therefore, was an essential form of resistance for the black power movement, and one that was relied upon heavily to communicate with everyday Americans.

Let’s highlight one particular image (a personal favourite of mine), depicting a mother holding her child while armed with a shotgun; a work from Emory Douglas published on the back cover of an issue in 1971. It is extremely striking in its use of the bright, bold yellow set against the deep black outlines - grabbing the attention of readers and drawing them into the message of the image. Douglas noted in an interview that “we couldn’t hardly afford but one color ink. So, it was black plus one other color to get that bold broad look,” meaning that his most iconic images are simplistic in the sense of their colour palette, yet it is the message they convey that has the most impact. (2)

While the party had a complicated relationship with misogyny and sexism within its ranks, the paper went to great lengths to resist dominant myths and stereotypes surrounding African American women. Many of the images featured within its publications were of women, particularly mothers, but did not sexualise, trivialise or minimize their role in the resistance movement. Linda Lumsden argues this point: ‘the newspaper’s imagery was a striking contrast to popular culture stereotypes of black women as self-sacrificing mammies, sexual objects, or emasculating matriarch.’(3) Indeed the image contrasts the traditionally passive role of motherhood with the violence associated with a weapon like a shotgun, playing with existing stereotypes of women. Here the reader is able to equate the power of a gun to the powerful nature of a Black Panther woman and it portrays mothers as strong defenders of their children. Additionally, Lumsden argues that ‘Imagery of women with guns… upended the notion that