Some Thoughts on Obergefell v. Hodges 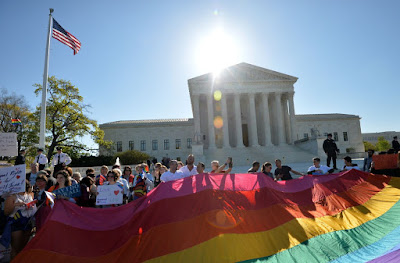 It has been a month since the Supreme Court announced in Obergefell v. Hodges that the right to same-sex marriage was protected by the US Constitution.  With no new cases coming down to fuel the fire of support or opposition to the Court, with the Court in recess and the Justices off on speaking tours, summer teaching, or vacation and thus largely out of the public eye, and as Americans gradually adapt to the reality of the Court’s ruling (whether in support or opposition), now seems like a good time to return to Obergefell and consider the Court’s ruling.

What is striking is the extent to which Justice Anthony Kennedy’s majority opinion and the principal dissent authored by Chief Justice John Roberts are anchored in a fundamental difference of opinion about same-sex marriage that has been part of the debate from the beginning: were those couples seeking the right to marry asking for a new right or simply for access to an existing right from which they had been historically excluded?

Roberts argues from a perspective which sees same-sex marriage as a new right.  His entire dissent is, in essence, based on this view, although it is not explicitly stated.  Roberts’ frequent and repeated criticisms of the majority for judicial activism, for reaching beyond the bounds of judicial duty, his argument that marriage has always historically been defined as between one man and one woman, and his reading of Court precedent all rest on the belief that the majority created something new in its ruling.  From this perspective, marriage has traditionally been defined as between opposite-sex couples, it was defined this way not as “the result of a prehistoric decision to exclude gays and lesbians” (p.4) but “to meet a vital need: ensuring children are conceived by a mother and a father committed to raising them in the stable conditions of a lifelong relationship” (not to mention to address questions of paternity) (slip opinion, p.5).  That history is important because when the Court traditionally addresses claims of denial of fundamental rights, it looks to the nation’s history and heritage as a way to determine whether that right is indeed “fundamental”.  Here, Roberts argues, that right is not and cannot be considered fundamental when it did not exist anywhere before the last decade of the 20th Century.  That the majority rules it is a fundamental right, from this perspective, can only be the result of judicial overreach.

Likewise, such a perspective shapes the dissent’s view of the Court’s precedent.  Cases which involved aspects of marriage, such as interracial marriage in Loving v. Virginia or restrictions on marriage by individuals who were imprisoned or who owed child support, involved access to marriage but did not seek to change the fundamental nature of the institution as established by history.  Those cases were thus rightly decided while Obergefell was not.  But perhaps the clearest statement of this perspective is the closing pages of the dissent addressing plural marriage.  The majority, Roberts argues, “offers no reason at all why the two-person element of the core definition of marriage may be preserved while the man-woman element may not.  Indeed, from the standpoint of history and tradition, a leap from opposite-sex marriage to same-sex marriage is much greater than one from a two-person union to plural unions, which have deep roots in some cultures around the world” (p.20).  Such an argument only makes sense if viewing same-sex marriage as creating a new right where all assumptions might be open to challenge.  On the other hand, if what granting same-sex marriage achieved was simply the opening up of a pre-existing right to couples regardless of gender then the question of plural marriage does not become an issue since the fundamental structure of marriage as between two people is not challenged. (Of course, comparisons of same-sex marriage to polygamy as well as less flattering comparisons have been made by opponents who seem to want to disparage gay couples because of their lifestyle: I do not see Roberts as falling into this category).

In contrast, Kennedy’s opinion is rooted in a clear understanding that all the same-sex couples involved in these lawsuits were requesting was access to a fundamental social institution on the same terms as opposite-sex couples.  Protecting the right of same-sex couples to marry does not, in this view, change the nature of marriage, only open it up to those historically excluded.  It is not a new right, but a very old one adapted to changing social circumstances, adaptations which recognise discrimination where it may not have been seen before (“The nature of injustice is that we may not always see it in our own times,” slip opinion, p.11).  Such changes are not new, Kennedy argued, since marriage has historically changed in other ways, including a move away from arranged marriages, coverture and other sex-based classifications.  Equally, the lesson from the Court’s prior cases, he argued, is that the nature of marriage can, and sometimes must, adapt to changes in broader society, as evidenced by the overturning of laws preventing interracial marriage.  Expanding marriage to same-sex couples is no different than these previous changes, he argued.

Crucially, though, viewing same-sex marriage as an equal right rather than as a new right places the exclusion of individuals from that right in a very different context.  Exclusion “demeans gays and lesbians,” teaches that “gays and lesbians are unequal in important respects,” and “impose[s] stigma and injury of the kind prohibited by our basic charter” (p.17-18).  Critics have compared Obergefell to the infamous Dred Scott (1857) ruling in which a majority of the Court held that African-Americans were never intended to be citizens under the terms of the United States Constitution (their argument, it seems, is about how the Court often gets things wrong and makes “bad” decisions).  Kennedy’s emphasis on dignity, respect, and the stigma of exclusion perhaps more closely echoes Justice John Marshall Harlan’s 1896 dissent in Plessy v. Ferguson against segregation in rail transportation or the Court’s landmark decision in Brown v. Board of Education (1954) holding segregated schools unconstitutional.  Exclusion, without good reason, is not acceptable and, in Kennedy’s view, and that of the four Justices who agreed with him, the reasoning offered by opponents of same-sex marriage could no longer bear the weight. 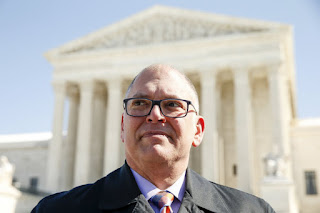 Of course the new right versus old right debate is not the only disagreement within the pages of Obergefell v. Hodges.  However, it is one not explicitly noted by the participants.  Viewing it this way allows us to see how perfectly reasonable people might disagree on the outcome of Obergefell without having to resort to the kind of vilification of the other side that can be seen in some of the commentary on the case and, unfortunately, in Justice Antonin Scalia’s dissent.  How people feel about the Court’s ruling in Obergefell might well depend which side they find most compelling in the new/old right debate but considering the case on these grounds does at least provide a way of understanding what happened away from the vitriol of the recent political debate.

Dr. Emma Long is a Lecturer in American Studies at UEA. Stay tuned for a follow up piece on Obergefell soon...