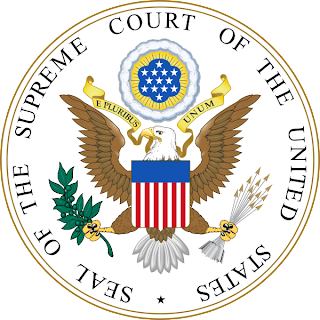 Of course she is right to point to the strategic importance of the Supreme Court in the American system of government. It’s a key element of the constitutional  ‘checks and balances’ which act as a prophylactic against extremism in the American system.  A sequence of appointments such as Roosevelt was able to make in his long presidency (1933-1945) ensured that a liberal voice would be heard well into the McCarthy era and beyond. The current situation is the reverse, though only by a narrow margin, showing a conservative majority during a ‘liberal’ presidency.
Checks and balances, however, are evidently not what Sarah Palin wants. Behind her heartfelt advocacy of the ‘traditional interpretation  of the Constitution’ lies a welter of assumptions about America’s history and the Constitution which the ideological right peddle as if they were self-evident truths.  There is, in truth, no single ‘traditional interpretation’ of the Constitution. The phrase is code for a strict constructionist interpretation—ie one based on the supposed  ‘original intent’ of the framers --  which the right believes has always been the saviour of American liberty.

There are two problems here. First, as often as not strict construction has worked against the extension of American liberty. It managed, along with other judicial devices, to delay the grant of rights to African Americans for close to a century after the Civil War. Secondly, strict construction was never the sole approach of the Supreme Court, as is clear from the career of John Marshall, who presided over the Court from 1801 to 1835. Marshall it was who established judicial review – the right of the Court to declare on the constitutionality of acts of Congress and of the states – and in the course of a long career he employed a judicious mixture of broad and strict interpretation of the Constitution with an emphasis in his landmark cases on broad construction. There was no single line, no ‘traditional interpretation’. Constitutional interpretation has always been a matter of debate and dispute.

But the right in America loves to believe that there was a golden time in America’s past when everyone understood what the Constitution really meant, when government kept off the backs of the people, and freedom reigned in the land. Then big-government Democrats and liberals came along and betrayed the values which defined what American really was. They tried to import alien European ideas such as socialized (for which read socialist) medicine, threatened traditional American freedoms such as the right to bear arms, spread immorality and irreligion, and most damaging of all peddled the falsehood that government might be the solution to some problems rather than the problem itself.

Thus it is that for the far right in America political debate consists in decrying your liberal opponents’  good faith as Americans. For that is what is at stake  --  the very essence of the country or what is often summed up in the word Americanism.  It’s possible to spend a great deal of time and intellectual energy defining this term but it’s best seen as a cluster of values that is both deliberately vague and highly precise in that, whatever it is, ‘you know it when you see it’, just as you know its opposites , un-Americanism and anti-Americanism. It’s a word that separates the sheep from the goats, us from them.

Like the saga of constitutional interpretation, the idea of Americanism carries with it a whole history which is a good part fantasy, based on the view that in the good old days government didn’t interfere with the American people. Why is it that the far right cannot accept that the debates which are held today about government stem from the beginning of America? Look at the debates between Alexander Hamilton and Thomas Jefferson in the 1790s about the role of government in promoting manufacturing industry. Ironically at this early date the big-government advocates (Hamiltonians) were the conservatives and the limited government Jeffersonians were the liberals. The point is, though, that America isn’t fully defined by either one of these sets of principles but by the interplay between them.  The debate over ‘ internal improvements’ in the decades leading up to the Civil War, about regulation of the railroads and utilities in the phase of industrialization, about wages and hours legislation, about Federal programmes in the New Deal and well beyond form the spine of American political history. American governments have been involved directly and indirectly in the promotion and regulation of business from the outset. Like governments in other advanced countries they have also been involved from the beginning of the twentieth century onwards in key social questions – race, religion, women’s rights, abortion, the criminal justice system and many others.

Yet the American far right speaks as if freedom was always something to be established in the teeth of government, as if government could never be a creator or at the very least a guarantor of freedom and rights – or that it could only guarantee rights by keeping out of the people’s business. The result is that there is a huge disconnect between the reality of what American government actually does and what the far right thinks it should do. It’s hard to see that government could play any role which would satisfy the fantasies of the far right.

A further consequence of the far right’s historical fantasising is that it militates against negotiation and compromise. If you believe the true faith has been denied and that only the true faith will do, there is no reason to come to accommodation with your opponents. In the real world, however, negotiation is a necessity and nowhere more so for the far right than in an America where the demographic trends are running against the Republican core constituency of white protestant males. But seismic demographic change is another central challenge in American history which has been met many times before. An understanding of American’s history will not of itself produce new policies but may forestall a panic reaction.  On the basis of the far right’s grasp of America’s history in other fields the omens are not good but -- who knows? -- realism may win out simply because it has to in order to ensure the survival of the Republican right.
Richard Crockatt

Emeritus Professor of American History, University of East Anglia
at 14:41