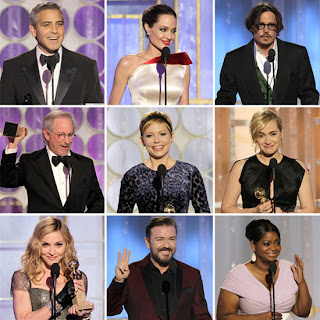 For many, January is the start of an intense guilt-induced period of cutbacks, and as these people stress about their post-Christmas budget and waistline, the film buffs are stocking up their alcohol supply and bracing themselves for the start of another awards season. The Golden Globes is very much the opening ceremony, where Hollywood’s finest (and Stacy Keibler) descend on the Beverley Hilton Hotel for a night of heavy drinking and self-congratulation. Enter Ricky Gervais.
Back for a third year, Gervais gave an equally funny but slightly less scathing performance as host, but no doubt we can expect some to criticise for not being controversial enough, and for others to be predictably offended because he said the word penis on prime time NBC. Of course we Brits were resigned to staying up until 1am to see Ricky’s opening monologue. Or at least the first sentence, at which point E! chose to play an ad for Kim Kardashian’s new show. Again. And Again. And Again.
But let’s put aside the unfathomable incompetence of E! for a moment and look at the winners and losers. Predictably, current Academy Award favourite The Artist won Best Comedy or Musical, Best Actor – Comedy or Musical, and Best Original Score, although George Clooney’s The Descendants also picked up Best Drama and Best Actor – Drama, so the Oscars could be a close call. The TV awards saw a welcome return to the spotlight for 90s sitcom stars Matt LeBlanc and Kelsey Grammar, scooping awards for Episodes and Boss respectively. On the whole, this year seemed more about rewarding the veterans than recognising new talent (as in the previous couple of years) with Spielberg, Scorsese, Woody Allen, George Clooney, Kate Winslet, and Meryl Streep all winning. And with Michelle Williams getting the Globe for her critically-acclaimed performance inMy Week With Marilyn, it will be interesting to see whether the Academy favour that or The Iron Lady. Homeland was the big TV winner with two awards and American Horror Story, Modern Family, and Downton Abbey also won.
But how much do we really care about awards? In recent years we have only tuned in for the hosting, and here's a handy compilation of all the Ricky Gervais bits. Enjoy, and those of you with the money to see these films please comment with your thoughts and let the financially crippled students know what not to waste their overdraft on. Or just gloat, but do that anonymously for your own safety.