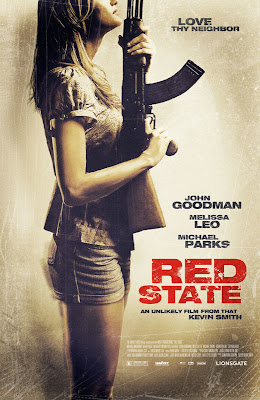 Whilst filmmaker Kevin Smith is well known for making comedies, his latest offering concerns a far more serious topic. Released at the Sundance Film Festival amongst controversy, Red State is a hard-hitting film about religious extremism in the USA but, unexpectedly, also offers a thought provoking image of the American government post 9/11.

It is marketed as a horror movie but, although there is plenty of gore, the horror comes more from the realities that the film depicts: the gunfight between a group of religious extremists and the authorities is loosely based on the Waco siege of 1993, whilst Abin Cooper and the congregation of the Five Points Church can easily be compared to Fred Phelps and the Westboro Baptist Convention.

Towards the end of the film, Special Agent Keenan says to the FBI that: "people just do the strangest things when they believe they're entitled. But they do even stranger things when they just plain believe." The Five Point Church, like the WBC, completely believe in their cause, and genuinely believe that they are appeasing their God by sacrificing gay men; Cooper states: "I hate the wickedness in America. Rampant fornication, adultery, abortion, flagrant sexuality everywhere....it's up to the righteous to curb the spread of this disease..." Here, Smith appears to be criticizing religion, or at least the blind faith that leads to such extremism. More interesting, though, is the idea of belief in entitlement: could this be seen as a critique of the US government, post 9/11? Whilst the events that are depicted in the film can definitely be seen to be based on the Waco siege of 1993, in which a siege instigated by the FBI against a religious sect resulted in the deaths of nearly 100 people, the story is given an extra twist by the reclassification of Cooper and his followers as terrorists by the FBI. In a post 9/11 world, Smith appears to be suggesting that there are two forms of American extremism: that of the terrorists that the world lives in fear of, but also that of the federal agents that take extreme measures in their attempts to protect their country. What Smith doesn’t do, however, is make it easy for the audience to decide which is worse: the audience is given a character on both sides to identify and sympathise with, meaning that your allegiance changes repeatedly throughout the film.

Whilst the film doesn’t present a sympathetic view of religion, it is an interesting choice by Smith to also offer a criticism of the US government. Towards the end of the film, one of the FBI agents announces: “what do you think this is, September 10th 2001?”, demonstrating that the Five Point Church has been reclassified as a terrorist organization because of a post 9/11 ideology.  Although the audience can understand the threat that the Five Points Church presents to the USA, they can also see that the FBI’s response is extreme and heavy handed. Red State is a disturbing and thought provoking film which is made more so by the knowledge that the events that are unfolding on the screen could just as easily be seen on the news: Smith has certainly provided food for thought for a post 9/11 society.
at 21:29

I'm really sorry not to have seen this film at the cinema although also not surprised that I did. The film was easily missed due to a complete publicity failure (I don't think I ever saw a trailer for it) and perhaps this is itself due to the lack of resolution you allude to. If the film is as unsettling as you make it sound I doubt it would appeal to a broad audience.
Your post raises some really complex questions, especially the idea that in reacting excessively to the threat of terrorists there is a danger of becoming something similar yourself. Would such governmental critique have been possible in the immediate aftermath of 9/11? The scary qualities of extreme religion recur in American Gothic literature, especially in the form of Puritanism, so perhaps we shouldn't be surprised that it forms the topic of a horror/drama movie?
Red State is definitely a film on my to-watch list!