What They Did Next: Kirsty Callaghan 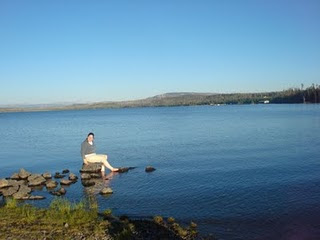 Kirsty Callaghan graduated from the School of American Studies this year, and is currently teaching and studying at the University of Wyoming. Happily, she's agreed to write us a guest post about her experiences so far. Make sure to check out her own blog here.


In spring of this year, I was trying to make plans for after my graduation. Somewhat fed up of people asking me (since first year) what you can do with a degree in American Studies, I didn’t want to just hang around at home figuring out what to do.

I decided to run for a position in the students’ union, but during my campaign, I found out that I had been offered an award I had applied for (at the recommendation of my UEA adviser) through the British Association for American Studies (BAAS). The award was for a Graduate Assistantship at the University of Wyoming, which allows a student to complete their Master’s or PhD while working for their department, usually as a teaching or research assistant, and in exchange, they get a fee waiver and stipend to cover living costs.

And so now, here I am! I have been in Laramie, Wyoming for a little over a month and I’m really enjoying myself. It’s been great to see how American Studies is done differently in the U.S., and I’m hoping to go to the American Studies Association (ASA) conference in Baltimore in October. I’m TA-ing for ‘Introduction to American Studies’, a second-year class that looks at American culture between 1945 and 1968. Although teaching is taking a bit of getting used-to, I am enjoying it and in a class I taught today, showed some clips of Mad Men to enhance our discussion of the Feminine Mystique. I like Laramie a lot and although I’ve been warned about the winters (snow arrives in late September and can hang around until May/June!), I am excited for what is to come. Since almost all Master’s degrees in the United States are two years, I’ll be here until 2013 and am hoping to examine aspects of the 2012 Presidential race as part of my research.

Wyoming’s landscape is dramatic and beautiful and I was able to go to Yellowstone National Park for Labor Day weekend, which was amazing. Like Oregon, where I spent my year abroad, Wyoming is one of the less frequently-visited and well-known states, but for me, that makes it more interesting. My year abroad prepared me well for advanced study in the U.S. and has enabled me to understand the academic culture here, as well as offering a diversity of experiences that have shaped the kind of person and student I have become.

Although I understand having a Master’s degree is no guarantee of a job, it is true that there are certain professional jobs here in the U.S. that require a Master’s in the humanities. In my graduate American Studies class this week, we discussed employability and learned about jobs as public humanities scholars, careers in the public sector, such as working for the National Parks Service, and the possibility of jobs in the Foreign Service. While some of these jobs are harder to get if you’re not a U.S. citizen, it is helpful to know that there are further opportunities after completing a Master’s degree.

There is life after getting a BA in American Studies, and sometimes that life involves cowboys. 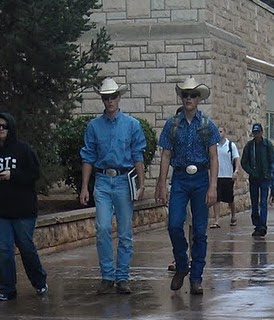 Email ThisBlogThis!Share to TwitterShare to FacebookShare to Pinterest
Labels: kirsty callaghan, What They Did Next