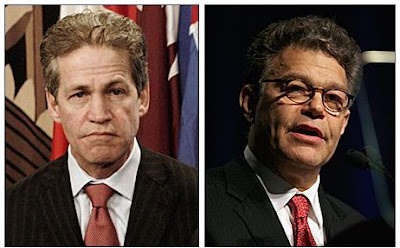 Coleman, Franken
Since the inauguration has come and gone, election night might seem like a distant memory. But not in a Minnesota, as Kirsty Callaghan explains:

After what has been one of the closest and most fiercely contested Senate races in recent history, Democratic candidate Al Franken was declared the winner of the Minnesota Senate race on January 5th. After the original count in November, incumbent Republican Senator Norm Coleman appeared to have won by 215 votes – a percentage of just 0.008% of the almost 2.9 million votes cast. State law requires that in cases where the margin of victory is less than 0.5% of the vote, a state-wide recount is required. The manual recount began on 19th November, with representatives of Franken and Coleman present to observe the examining of each one of the 2.9 million votes and with challenged ballots sent to the independent Canvassing Board. 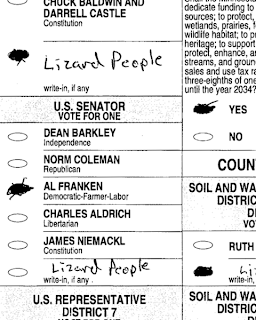 After several weeks of re-examination, ballot challenges from both campaigns (including the much-discussed ‘Lizard People’ write-in (see left)) and the acceptance of many previously-rejected absentee ballots, Franken was shown to have a lead of 225 votes, a result certified by the Minnesota State Canvassing Board on 5th January. The change in fortune was owed partly to successful ballot challenges and the fact that those manually recounting the ballots could detect voter intent where electronic counting machines could not. However, because state law requires a waiting period of seven days before the Canvassing Board can issue an election certificate, Coleman’s lawyers had the chance to file a contested election lawsuit. This means that when Coleman’s term came to an end on 3rd January, Minnesota was left with just one Senator and the certificate of election cannot be issued to Franken until Coleman’s election contest has been resolved. A three judge panel met this week to consider whether, as the Franken team suggests, the case should be thrown out before it reaches trial. If they choose to begin a trial, Minnesota's second Senate seat could be empty for months to come, whilst the scandal surrounding Blagojevich’s appointment to fill Obama’s former Illinois seat has left a second Senate seat unfilled.

You can catch up with the story so far on the Caucus, Salon, the New York Times, and Slate. And you can preview the ins and outs of the trial thanks to MinnPost.com.
at 07:34

There are a couple of factual errors in this otherwise excellent posting. The canvassing board's job was not to declare a winner. They merely recount the votes and make determination of voters intent on disputed absentee ballots. Secondly, the Board does not issue an election certificate. That is the job of the Governor and the Secretary of State. As you stated, they cannot do so for 7 days in order to allow for the filing of an election contest. Norm Coleman did file and we have now moved to that phase of the process.

This has been a remarkably open and transparent proceeding. Live video feeds have been allowed in every instance, including the current hearings before the three judge panel.

What we have in Minnesota is a exceedingly close election whose subsequent recount has been thorough; up to this point.

You have provided links for those interested in following all of this. I recommend MinnPost.

Thanks for your comments. I did my best to check the facts, but of course errors do sometimes happen. I was careful not to say that the Canvassing Board declared a winner, but had read that the results had been certified by the Canvassing Board (http://thecaucus.blogs.nytimes.com/2009/01/05/minnesota-supreme-court-rules-against-coleman-2/?scp=1&sq=franken%20board%20winner&st=cse). Of course now the courts are involved it could run and run. We’ll see what happens!